Before now, we've had some drugs for Alzheimer's, but they've only ever slowed the disease down. None of them have been able to cure it completely. But then Director Kido's AD-9 turned up. And it's worked perfectly in tests on mice, at least. If it can work on humans as well... maybe we can finally kiss Alzheimer's goodbye.
— Ko Hattori on AD-9

AD-9 (アドデック9, adodekku nain) is a developmental drug being researched by the Advanced Drug Development Center as a potential cure for Alzheimers Disease. The drug's creator and lead researcher is Yoji Shono. The research project is a key element that ties together a number of subplots in Judgment.

Development of AD-9 is known to have taken place as early as 2015. Dr. Shono's research had born fruit to the extent that the drug was effective on lab rats. However, in breaking protocol, he secretly administered the drug to an Alzheimers patient, only to witness the patient suffer a painful death as a result. Shono hastily hid the body in a laundry truck driven by Shinpei Okubo and later covered his crime further by murdering ADDC nurse Emi Terasawa and framing Okubo.

Shono kept the lethal effects of the drug secret until just after Ryusuke Kido announced the development of AD-9 to the world in a press conference. With the backing of the senior Health Ministry official Kaoru Ichinose, he continued human experimentation of the drug on subjects in a secret lab established in Kamurocho. All tests resulted in the deaths of their subjects.

Eventually, prior to the trial of Detective Kazuya Ayabe for the murder of Masamichi Shintani, Shono informed Kido that the toxins in AD-9 had proven impossible to remove. However, driven to find a cure to Alzheimers, he continued his research regardless. On the day of Ayabe's trial, while Kido is testifying what Shono told him to the court, Shono is caught up in an assault on the ADDC by Mitsuru Kuroiwa.

Cornered, Shono reveals what he earnestly believes to be a dosage of a completed AD-9, free of its deadly effects. To prove it, he injects himself, only to succumb within moments to the same side effects as all other human test subjects. He develops a powerful headache, and his eyeballs develop a blue pigmentation. In the end, he dies an agonizing death, and the truth behind AD-9 is revealed to the world.

One of the AD-9 presentation slides. 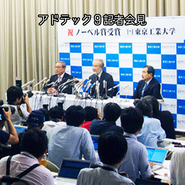 Placeholder Case file picture of the AD-9 conference during the development of Judgment
Add a photo to this gallery
Retrieved from "https://yakuza.fandom.com/wiki/AD-9?oldid=76511"
Community content is available under CC-BY-SA unless otherwise noted.