Ken Mitsuishi
Akihiro Ehara (江原 明弘, Ehara Akihiro) is a former senior patrol officer, and father of Toshiro Ehara in Lost Judgment. His trial and murder of Hiro Mikoshiba is one of the driving plot points of Lost Judgment.

Ehara holds tremendous resentment towards the law for its failure to convict Hiro Mikoshiba, the student teacher and bully who drove Ehara's son, Toshiro, to suicide. He has a cold personality with no remorse over his murder of Mikoshiba, but expresses much regret over his poor response to his son.

When Toshiro was in middle school, he informed Ehara about his bullying problem, but Ehara responded by reprimanding him for appearing weak and telling him to "Grow a spine." For high school, Toshiro moved to Isezaki Ijincho with his mother to attend a private academy while Ehara stayed in Tokyo for his line of work.

Toshiro committed suicide in 2018 and online posts stated he was bullied. Ehara scraped together enough money to file a lawsuit against Seiryo High School, which was drawn out due to a lack of evidence caused by secret jury and witness tampering, during which his wife chose to cut contact with him but did not divorce due to a lack of desire to go through the process.

The court case was eventually dismissed in mid-2021. Around this time, Jin Kuwana approached Ehara while he was on duty and played a recording of Yoko Sawa's call where she stated Toshiro was bullied but evidence was disposed of and she was silenced. Kuwana pushed Ehara to the path of vengeance and set up a scheme to humiliate the law by having him use a sexual battery charge as an alibi for murder, then expose it all later.

Kuwana obtains a 3D printing of a part of Ehara's face to impersonate him and has his unwilling subordinates take Mikoshiba to an abandoned building in Ijincho. On October 7, before murdering Mikoshiba, Ehara meets with Yui Mamiya in the underground platform of Ikebukuro Station away from security cameras to plant fibers of her undergarments on his hands. After that, she rides the train with Kuwana (disguised as Ehara) following her in, while the real Ehara heads to Ijincho.

Ehara wears a full-body suit to keep evidence off of his standard attire and has Mikoshiba tortured, refusing any apologies from his son's bully. Ehara then slits Mikoshiba's throat while the act is being recorded on a WORM card to use as irrefutable evidence of Ehara's crime, after which he hides the knife coated with Mikoshiba's blood in his wife's altar to Toshiro. The WORM card is hidden in a pendant with Toshiro's picture and would be given to Kuwana at an unspecified time after. The scene between "Ehara" and Mamiya on the train is made to look like he groped her when she chases after him. The real Ehara waits at a blind spot in Shinjuku Station's surveillance system and swaps places with the disguised Kuwana there. After the swap, Mamiya yells out to catch the "groper," and Ehara is restrained and recorded by Kuwana's accomplices with his face very clearly visible.

At his trial on December 6, Saori Shirosaki and Issei Hoshino represent the defense and Ehara denies having groped Mamiya, making sure to act ill-mannered to guarantee being sentenced. When he is sentenced to six months of penal servitude, Ehara reveals the body the police recovered three days ago was Mikoshiba, the man who drove his son to suicide and went unpunished by the law. He is visited by Saori and Yagami, but does not give them any important information. When the footage of Ehara's crime is uploaded online, he informs his supervisors that he does not wish to speak to his lawyers, denying them an opportunity to question him for a time.

Saori and Yagami visit Ehara after some time and tell him what they learned of his scheme from interrogating Mamiya, though he dismisses what they tell him. He tells them of how he previously treated Toshiro and how Kuwana met him, and when discussing the effectiveness of the law, he implies killing Mikoshiba, and accepts an appeal. Yagami informs him that their scheme of humiliating the law resulted in Sawa's murder as collateral damage, even though it was not their intent to do so. The two visit him again some days later, and he states his plan involves admitting to killing Mikoshiba after his sentence is over, leading Yagami to believe he kept the murder weapon to use as evidence. Though he can save Kuwana's life by confessing at the present moment, he states the two already committed to their plan with their lives, and he makes his leave.

Ehara's retrial starts in early 2022, and he at first states he is guilty of sexual battery and that the defense's explanation of their scheme is speculation, but then Yagami states he is the only one with a recording of Sawa's confession and would delete it after the trial is over. Not wanting to lose the only memento of his son, Ehara is unable to hold back and admits his intention to mock the legal system through his killing of Mikoshiba, directing the police to the knife he hid as evidence and later breakdown in tears as the trial ended. His trial is adjourned and he is later charged with Mikoshiba's murder, this time fully cooperating with investigators. 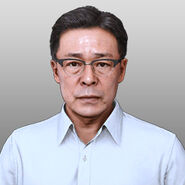