Charles Glover
Andre Richardson (アンドレ・リチャードソン, Andore Richādoson) is the secondary antagonist in Yakuza 3. He is the leader of Black Monday, acting as a double agent within the CIA.

Richardson appears as a bulky man, with longish dirty-blonde hair. He wears dark sunglasses and a grey suit with a red tie underneath a black trenchcoat. In addition, he appears to wear a couple of black, leather gloves (probably to hide his fingerprints). His voice seems to have a deep tone.

Daigo Dojima, the sixth Chairman of the Tojo Clan was in his office when he met Joji Kazama (though believed he was Shintaro Kazama) and Richardson. At that point, Kazama was telling Daigo about a resort deal in Okinawa, which Daigo refused to agree because an orphanage named Sunshine Orphanage sits on the land where the resort was supposed to be built, and that it was run by Kazuma Kiryu, the Fourth Chairman of Tojo Clan. Afterwards, Kazama decided to pull out something which Daigo thought was a gun and attempts to shoot him, but Daigo himself got shot instead by Richardson.

A couple hours later after Richardson shoots Daigo, he and Joji travel down to Okinawa, where they both break into the Ryudo family office in order to retrieve the deed to the land of morning glory. As they found the deed, Shigeru Nakahara (patriarch of the Ryudo Family) catches them in the act and attempts to stop them, but Richardson stops Nakahara by shooting him. Both Richardson and Kazama obtain the deed and escape, leaving Nakahara fatally wounded.

After Kiryu discovered Daigo and Nakahara had been hospitalised, he travelled down from Okinawa to Kamarucho, in pursuit for the truth of both the incidents. On his way to meet Osamu Kashiwagi, Kiryu was ambushed by Richardson and his men but managed to fight them off. After being beaten, Richardson attempted to kill Kiryu by pulling out his gun, but was spooked as he heard police sirens nearby. Richardson then spared kiryu, and he and his men escaped.

Later on the game, at Toto Hospital, Kiryu crossed paths with Richardson, and two fights ensue, both are won by Kiryu. At this point, it was revealed that he leads a group called Black Monday, which consists of arms dealers looking to take advantage of the deal by proposing a military base near the resort and that he conspired with Yoshitaka Mine during the events of the game. Richardson was under cover as a spy within the CIA, that way Richardson was able to carry out the CIA’s orders by ensuring the resort deal and military expansion bill passed no matter what in order to lure out Black Monday. However, he was secretly carrying out orders sothat he could achieve Black Monday’s goal of stealing a high ballistic missile defence system and selling it to the black market, hence the reason why he met with Daigo and tried to steal the deed owned by Nakahara, to ensure that the military expansion bill would be approved.

Later, a fight ensues at the hospital's roof between Kiryu and Mine, which resulted in Mine's loss. Disappointed at Mine's defeat, Richardson reveals himself to be the leader of Black Monday and attempts to kill both Kiryu and Mine, but was prevented by Daigo (who just recently became conscious). Richardson gets back up and grabs his gun and tries to kill the others for the second time, but Mine grabs Richardson. Looking to redeem himself for his sins, Mine sacrifices himself by throwing himself, as well as Richardson, off the roof of the hospital, therefore killing them both in the process.

Because of his status as a CIA agent, he acquired some knowledge and training in martial arts, evidenced by his spinning kicks, flying kicks and precise strikes. Unfortunately, his prowess seems to be somewhat short, for his strikes are very slow and easy to dodge and counter. Despite this, Richardson is a proficient marksman, armed with dual pistols and a shotgun. While dual wielding his pistols, he can unleash a barrage of bullets in one direction that can seriously harm any unaware opponent. His shots can be very damaging unless constantly moving. From time to time, he will also pull out a shotgun and will try to blast Kiryu with several shots. This can be countered using a heat move, forcing him to go back to his pistols. He seems to fight in a very similar way to Kazuto Arase, having similar athletic moves while dual wielding guns. 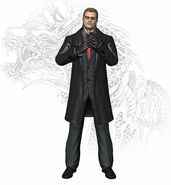