watch 03:41
Wiki Targeted (Games)
Do you like this video?
Play Sound
Majima Construction is at work!
This article is a stub and is under construction. You can help Yakuza Wiki by expanding it. Be sure to check out the manual before you get started!

Leader of the Saio Triad

Junpei Morita
Big Lo (大罗, Dà Luō/ビッグ・ロウ, Biggu Rō) is an antagonist featured in Yakuza 6. He is the leader of the Saio Triad.

Always appearing grim, he is a chief who uses his overwhelming power to bring the Saio Triad together.

Big Lo has a comb-over hairstyle and a well-trimmed goatee.

Big Lo became the leader of Saio Triad around thirty years before the events of Yakuza 6, taking over from his father, who before the war, worked with Heizo Iwami.

He originally had two sons, Jimmy Lo and Yuta Usami, but is forced to give Yuta up due to the one child policy in China.

Following the devastating fire within Little Asia, an area of the town so-called due to its large population of Asians, he begins a full-scale advance on Kamurocho. After his first son's death, he seeks out Yuta, as he intends to pass the inheritance of the triad on to him due to the Blood Laws of the Saio Triad. 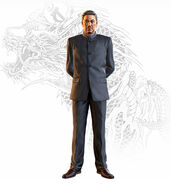 Add a photo to this gallery
Retrieved from "https://yakuza.fandom.com/wiki/Big_Lo?oldid=101131"
Community content is available under CC-BY-SA unless otherwise noted.