Bob is located at the Kamurocho Shrine and Sotenbori Temple. Players can exchange CP (Completion Points) from him to obtain special items and skills.

Bob is located at the Tenkaichi Street Entrance in Kamurocho. Players can exchange CP (Completion Points) from him to obtain special items and skills.

Bob will appear in Okinawa on Kitaryu Street south of the river and across the street from the monorail after completing all 10 hostess side quests in the game but under the name Bob Utsunomiya III. He will give Kiryu the Lucky Binding. You will also be rewarded the Beads of Good Fortune from him should you open all 100 coin lockers in the game as well as a Sacrifice Stone if you have completed all Revelations.

In Yakuza 4 a man standing outside the Theater Square coin lockers hints that Bob is the one who stashes items in the coin lockers and scatters the keys throughout Kamurocho.

Bob is also at Naomi's Palace with gifts for the protagonists.

In Yakuza 5 Bob can be found at Naomi's Palace, offering gifts and completion rewards to protagonists.

In Last Adventure mode, the player character can choose to have Bob Utsunomiya as their partner after satisfying certain conditions. 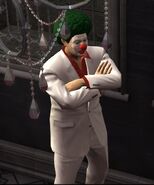