At the beginning of December 1988, the club was owned by Youda and had three hostesses, the Number 1 being Yuki.

Majima is forced into running it when he first encounters Youda, outside the club. It becomes the focal point of Majima's Cabaret Club Czar arc.

In this game, Sunshine has come full circle, becoming the very same type of unethical corporate club that Yuki and Majima helped to bring down in Yakuza 0. In her new role as owner of Four Shine, Yuki enlists Kazuma Kiryu as manager in the Cabaret Club Grand Prix arc, ultimately winning over Club Sunshine and its new owners, the Kanzaki Group. 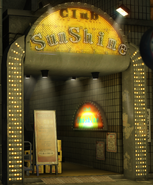 Club Sunshine's entrance.
Add a photo to this gallery

Retrieved from "https://yakuza.fandom.com/wiki/Club_Sunshine?oldid=63118"
Community content is available under CC-BY-SA unless otherwise noted.