Brent Mukai
Daimu Akutsu (阿久津 大夢, Akutsu Daimu) is a major antagonist featured in Lost Judgment. He is a former member of the Tojo Clan, and RK's second-in-command.

Akutsu has an imposing build, and, though his musculature is never shown, it can be assumed that he is quite muscular, being able to take a kick head-on from Yagami without being knocked back. He seems to have a large tattoo underneath his shirt. His hair is dyed blonde with noticeable dark brown roots, and he has a small amount of facial hair.

Akutsu wears a long-sleeved leopard print shirt with gray and white borders, orange sweatpants rolled up at the bottom, and white sneakers.

Akutsu was a member of the Nikkyo Consortium during his time in the Tojo Clan. When Soma defected, Akutsu warned him of the consequences, but Soma advised him to leave as well.

Akutsu and other members of RK are searching for Shinya Kawai in Kamurocho when they stumble upon Takayuki Yagami and Masaharu Kaito. He invites Kaito to join RK and sends thugs after them to speed up the process. The duo eventually arrives at RK's facility, but Yagami is made to stay outside. Akutsu tries to convince Kaito to join now that they are no longer bound by the constraints of being a Tojo Clan subsidiary, but Kaito is firm in wanting to remain a detective. Akutsu has his subordinates fight Kaito, at which point Yagami joins in and the duo emerges victorious. Soma appears and complies with Kaito's request of not having him join RK, to Akutsu's displeasure.

After learning of Kawai's death, RK arrive in Isezaki Ijincho to search for Jin Kuwana. They discover Yoko Sawa's link to Kuwana, and raid her apartment to force her into calling Kuwana over. When Kuwana arrives at the apartment complex, Akutsu emerges from Sawa's apartment to fight Kuwana and Yagami, who is also present. Kuwana is able to escape during the fight and Akutsu shows Yagami live video of Soma threatening Sawa, which his underlings use to knock him out. Akutsu has Yagami's phone throws to the side to prevent it from being GPS-tracked.

Akutsu takes Yagami to an abandoned storage site, where he is joined by Soma in interrogating him. After Soma declare they have no further use for Yagami, RK beat him up and Akutsu plans to have him ripped apart with a chainsaw until Kaito and Sugiura arrive to the rescue. They and Yagami defeat all RK members present, and Akutsu flees when Yagami tries to interrogate him, eventually returning to Kamurocho.

At Queen Rouge, Saori Shirosaki makes high sales and Akutsu decides to give her his bonus, sending a cab for her. He had been informed that Saori was seducing RK members for crucial information, and Akutsu intends to trap her. Saori calls for help from Yagami, Kaito, and Higashi, who are successful in defeating all RK members present. They ask Akutsu for Soma's background and he tells them what he knows, but he was unaware Soma is an member of Public Security who had gone undercover. He is terrified when he realizes that he learned information Soma does not want to be known, and his fears are quickly realized when two RK members disguised as police officers shoot him dead on the spot.

Akutsu uses his body size as an advantage but looks can be deceiving as while he maybe a huge and tall person, his attacks can be quite fast. His fighting style consists of a few wresting moves and most of it being street fighting based moves. He performs dropkicks, punches and grabs. He sometimes performs a punch and grabs the player to headbutt them, causing them to be stunned for a short period of time. He also grabs and when still in his grip, will punch the player three times, knocking them down with the last hit. He also has a parry stance he performs along with a taunt and when attacked, will retaliate with a strong punch knocking the player down. Once the player attempts to grab Akutsu from the front or behind, he'll reverse the grab and grab the player instead. In their final fight, Akutsu can grab the player by their feet and spin them around.

Once he enters his heat state, he will have access to a running kick attack that can put the player in a juggle state. When the player is still knocked down on the floor, Akutsu will perform an elbow drop. He is also able to pick up any nearby furniture and attack the player with similar animations to Kiryu's Beast style in his final fight, though he only seems to do one hit before dropping the furniture.

His mortal attack involves grabbing anybody whether it's the player or the supporting characters and performing a Full Nelson suplex.

When he fights with a chainsaw, he performs wide and slow swings that can take up a huge chunk of health and leave a bleed effect. He will plow the chainsaw onto the player when they're on the ground. When the player succeeds in a QTE against Akutsu with a chainsaw, it will disarm him of the saw and force him to revert back to his hand-to-hand combat and enters into his heat state immediately. 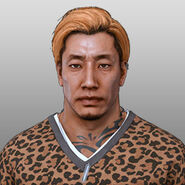