Junior leader of the Majima Family

Minami. I roll with the Majima family.
— Minami to Saejima, Yakuza 4

Daisaku Minami (南 大作, Minami Daisaku) is a character in Yakuza 4. He is the junior leader of the Majima Family.

Minami has a rather quirky and prideful personality, but shows respect for his boss. Because of this, and his admiration for Majima, he adopted a Kansai accent.

Minami has several facial piercings as well as several indentations on his face and ears, suggesting that he may previously have had even more. He has a traditional Japanese tattoo along with Western ones, it consists of a snake wrapped around a skull on his back, a knife piercing a skull above the face of a woman on his left arm, a black panther on his right arm, as well as several other tattoos on his chest, and the English word HONOR on his abdomen. He has a mohican hairstyle and wears red sweatpants and brown shoes.

He first appears in Part 1: Akiyama, Chapter 4: The Promise where he and four other members of the Majima family are causing a scene in Shun Akiyama's hostess club Elise while looking for a hostess named Lily. When Akiyama is called to the club to deal with them, he finds Minami singing Kamurocho Lullaby with the other Majima family members watching him. Minami introduces himself then proceeds to sing GET to the Top! but gets interrupted by Akiyama, who asks why they are there. Minami then tells him that they're there on Majima's orders to find Lily, though doesn't know the reason why. After Akiyama refuses to give her up, Minami attacks him. After Akiyama defeats him, Minami attempts to continue fighting until he is stopped by Majima, who reveals that he is looking for Lily in order to protect her.

In Part 2: Saejima, Chapter 4: Oath of Brotherhood, Minami waits for Taiga Saejima's arrival after barging into his hideout and subduing everyone in the room. When Saejima arrives, Minami tells him that Majima wanted to meet with him the next night at Millennium Tower.

Minami later appears at the Millennium Tower when Saejima arrives looking for Majima. On Majima's orders, Minami and several other members of the Majima family test to see how strong Saejima is before Majima meets with him. Minami stands back while lower ranking members of the Majima family fight Saejima and only steps in to fight him personally after they are all defeated. Again, Minami will be defeated but refuses to give up until Majima shows up.

Majima mentions Minami during a conversation with Saaya Kawai, saying, "One of my men didn't drink at all, but then he started practicin' fire breathin' with alcohol and got to be a pretty good drinker".

Minami uses a "drunken style" while fighting in which he attacks opponents while intoxicated, which makes him more agile and nimble than he is normally.

During fights, he will frequently stop to take a swig from a bottle of alcohol. In battle quicktime events, he will drink from the bottle and attempt to spray the alcohol over his enemy, he will then bring out a lighter and use it together with the alcohol to breathe fire. 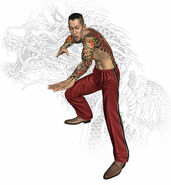 Promotional image for the Majima Construction pack in Ryu ga Gotoku Online
Add a photo to this gallery
Retrieved from "https://yakuza.fandom.com/wiki/Daisaku_Minami?oldid=75400"
Community content is available under CC-BY-SA unless otherwise noted.