Daniel Feldman is a challenger in the Underground Ring of Purgatory. He is a fugitive from the United States who's wanted for first degree murder.

Daniel Feldman was an American "white hat" hacker who traveled the world consulting for companies on their computer network security. One day, as part of a training exercise at a classified defense contractor, he stumbled into a top-secret military network and discovered secrets... secrets he was not allowed to know. To silence him, government operatives framed him for first-degree murder and ensured he would spend a decade in federal Supermax prison.

He bided his time in prison, spending all day bodybuilding, practicing martial arts, and studying Japanese. When he was released on parole, he knew he could never live a normal life in the United States again. He took the first flight to Tokyo to join the yakuza, using his hacker experience to rapidly attain a high rank in the organization.

As for why he is fighting in the coliseum, only the Florist knows the answers. 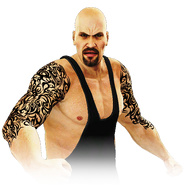 Add a photo to this gallery
Retrieved from "https://yakuza.fandom.com/wiki/Daniel_Feldman?oldid=73702"
Community content is available under CC-BY-SA unless otherwise noted.