A challenger from the Underground Ring of Purgatory. He is a former middleweight champion of Muay Thai. In Kiwami, his translated name is spelt as Gaowayan Pramuk.

The former Muay Thai champion of the world.

He's won over many fans by using swift footwork and sharp blows to bring down larger, stronger enemies.

Because he still has the skills to compete as a pro athlete, his reasons for fighting in the underground arena are among the coliseum's greatest mysteries. 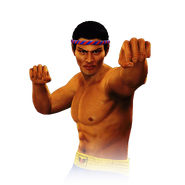 Add a photo to this gallery
Retrieved from "https://yakuza.fandom.com/wiki/Gaowayan_Pramuk?oldid=73705"
Community content is available under CC-BY-SA unless otherwise noted.