Edit
watch 02:05
Wiki Targeted (Games)
Do you like this video?
Play Sound

"You want sudden death or suds on breasts? It's service... with a pounding."

Gary "Buster" Holmes (ゲーリー・バスター・ホームズ, Gērī Basutā Hōmuzu) is the former champion of the Coliseum, notorious for being undefeated until he fights Kiryu. He also works as a bodyguard for The Florist within the Underground Coliseum (or "Purgatory" in the English Dub).

Gary is an American wrestling champion who, in search of a challenge, travelled to Japan to participate in the Underground Coliseum tournaments hosted by the Florist of Sai. He quickly became the arena's champion and, enraptured by the thrill of competing in these tournaments, he relocated to Japan full-time and became the Florist's personal bodyguard.

Gary is a tall and muscular black man with short hair and a wide neck. He is usually portrayed as noticably taller than Kiryu. Gary only wears forest camo pants, a black leather belt with a leaf shaped buckle, and a pair of black medium-length boots. He also wears a Majima Construction hard hat in his appearances in Yakuza 2 and Yakuza 4.

In Yakuza Kiwami and Yakuza, he wears light blue, white, and black high top sneakers, though in later appearances, he wears boots.

In Yakuza: Like a Dragon, he wears a white tank-top, tan pants and the black boots from previous appearances. When summoned, he ditches the tank-top with a metal spiked ball on each hand.

Gary is introduced in Chapter 5, serving as the third and final rival that Kiryu has to fight. He was undefeated for three years, until Kiryu defeated him.

During the second game (and its remake), Gary works as a builder for Majima Construction and he continues to fight in the Underground Coliseum.

In 2010, Gary is still working for Majima on the Kamurocho Hills project during Yakuza 4. After Kiryu returns to Kamurocho during the game's events. In the substory "The Hills Have Noise," Kiryu would overhear members of the Ueno Seiwa Clan mentioning that someone went through Kamurocho Hills prior to his rescue of Taiga and Yasuko Saejima from the Ueno Seiwa Clan earlier. Later Kiryu would overhear pedestrians mention hearing noises at night at Kamurocho Hills. Kiryu then would head to Kamurocho Hills to investigate for himself, up there he would find Gary who would be working, Gary talks about how he has always had the goal of beating Kiryu, so Gary decides to challenge Kiryu to one last fight. Kiryu comments that his understanding of Japanese has improved.

Gary serves a military instructor during the Kamurocho Zombie Apocalypse as he reveals he has Extensive Combat Training in Firearms and helps the Cast in Training in Combat.

Gary is introduced in chapter 3 as part of a mandatory side-mission where he is working for "Poundmates", a phone service that sends allies to fights in exchange for money. He uses the move "Gary Buster Homecoming" (G • B • H in Japan) to damage all enemies when summoned, with a chance to stun them. He is said to be the most popular employee of Poundmates.

Gary Holmes can be used as a member of Majima Construction:

Though his fighting style is wrestling, he employs various techniques to deal with any foe, allowing him to rule the bare-fisted regulation grand prix.

He is also the bodyguard of the tournament sponsor, the Florist, and the two share an unbreakable bond.

Former champion considered to be the undefeated king of underground fighting. He fought Kiryu a year ago and lost for the first time. Now he seeks revenge. 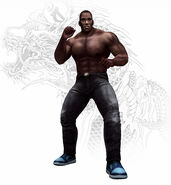 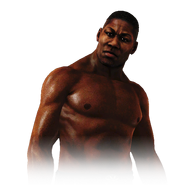