Would it kill you to tell me how pretty I am?!
— Hana to Akiyama, Yakuza 4

Hana (花) is a recurring supporting character in the Yakuza series first introduced in Yakuza 4. She is the branch manager of the Kamurocho location of Sky Finance as well as Shun Akiyama's secretary.

Hana is a woman of average height, with a chubby build. She wears glasses and always has her brown hair tied neatly up in a bun. In the epilogue of Yakuza 4, she loses a significant amount of weight after being unable to eat after her separation from Akiyama.

She is almost always seen wearing a blue tartan vest over her white blouse, grey knee-length skirt over tights, pink pumps, with a pink kerchief tied around her neck. The coat she wears in the epilogue of Yakuza 4 is nearly identical to Yasuko Saejima's, albeit with a slightly different color.

In stark contrast to Akiyama, Hana is a very dedicated worker. She's always the one to take care of the finances and keep the office clean. Despite being his secretary, Hana is very strict with Akiyama, not-so-gently reminding him about the payments he is late to collect and berating him for being lazy. Hana is relatively short-tempered, however she is a kind-hearted woman who cares very deeply for Akiyama despite her griping.

Hana formerly worked with Akiyama at Toto Bank. When he was fired, she lost contact with him, but after his establishment of Sky Finance, he and Hana reunited and she became Akiyama's secretary.

During the events of Yakuza 4, Hana sends Akiyama to collect an overdue loan payment. After a few hours of Akiyama getting sidetracked, Hana calls him about suspicious activities near the office, and tells him to return at once. He witnesses Hiroaki Arai killing Masaru Ihara, and mistakenly gets arrested by the police. It is thanks to Hana's testimony and her insistence on his innocence that the police let Akiyama go free. When Akiyama goes to meet Takeshi Kido at Theater Square, a group of Shibata's lackeys attack Hana, but she manages to defeat them all with relative ease.

Hana recognizes that their latest client, Lily, looks exactly like Akiyama's ex-fiancée, and immediately becomes distrustful of her.

She goes out shopping for food, and finds Kido at the office when she returns. They are ambushed by the Hatsushiba Family, and Hana gets knocked unconscious by the lieutenant, Takumi Midorikawa, who kidnaps Kido. Akiyama returns to the office to find her injured, and sends her to the hospital to recover.

Upon her return, she is shocked to learn that Akiyama lent Lily the ¥100 million she asked for, even though he knew he likely won't get it back. Hana questions Akiyama's decision, but he tells her that it was his money, and insists that he can do whatever he wants with it.

Fed up with Akiyama's irresponsibility, Hana becomes enraged and runs away. After being caught by Akiyama, she asks him why he would still be fond of a woman who looked like his ex-fiancée after what she did to him. Akiyama responds that he could never let go of some things in the past.

This is the final straw for Hana, and she decides to quit then and there, telling Akiyama to try to look after himself.

She is absent until the epilogue, when she returns to Sky Finance. Akiyama is shocked at Hana's new appearance, and she admits that she hasn't been able to eat ever since she left him, asking for her old job back. They share a moment where Hana thinks that Akiyama is going in for a kiss, but he pulls away at the last second, acting clueless.

Hana makes a voice cameo in Yakuza 5, appearing in a phone call with Akiyama at the beginning of Chapter 3, Part 3. She berates him for not showing up in Tokyo, and made expresses her annoyance about him slacking off about starting up the Sotenbori branch of Sky Finance.

After Akiyama's first fight, Hana contacts him to let him know about the situation regarding Dyna Chair.

Following the closure of Sky Finance - just before the events of Yakuza 6 - Akiyama sends Hana back to her hometown in order to remove her from harm's way.

Hana comes down with the flu, and Akiyama is forced to leave her resting in New Serena while he goes to find her medicine. While he is in the quarantine zone, Hana goes missing, and Akiyama discovers that she has been kidnapped. He rushes over to her supposed location, finding her hiding, stuck in a locker. He gives her the pills, but they are attacked by a Prototype. They vow to stick by each other just before the men that Akiyama had rescued earlier burst in to get Hana to safety as Akiyama fights the mutated zombie.

Hana is an admirably strong fighter. She able to hold her own against a group of yakuza before Akiyama is able to reach her and provide backup. Akiyama implies that this is a common feat, and trusts Hana to handle herself against anything that comes her way.

In the first Trial Ultimate Challenge, she shares the same moveset as heavy enemies and she can cause immense damage with her attacks. 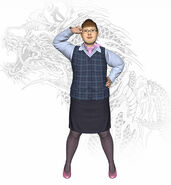 Akiyama and Hana reunite in the Yakuza 4 epilogue

Add a photo to this gallery
Retrieved from "https://yakuza.fandom.com/wiki/Hana?oldid=75757"
Community content is available under CC-BY-SA unless otherwise noted.