Yakuza 6
Haruto Sawamura (澤村 遥勇, Sawamura Haruto) is a character in Yakuza 6. He is the son of Haruka Sawamura and Yuta Usami.

The infant son of Haruka Sawamura and adoptive grandson to Kazuma Kiryu, Haruto was conceived from a one-night stand slightly over two years after the events of Yakuza 5, during Kiryu's time in prison. With the help of Toru Hirose, a pregnant Haruka disappeared from Onomichi after she learned her partner, Yuta Usami, was the backup heir to the Saio Triad and his retainer Shu Tatsukawa was pressuring her into having an abortion. Haruto was born while his mother was hiding in a small town not too far from Onomichi, and was raised by her in relative peace until Tatsukawa found them and lured Haruka to Kamurocho.

Kiryu first met Haruto in the children's ward at the Touto University Hospital after he discovered that Haruka was left in a coma and put under intensive care. Concerned that child services would have Haruto sent to an orphanage where he couldn't help or even reach the infant, Kiryu wanted to take care of him, much to Akiyama's disagreement as that would mean Kiryu would be kidnapping him, causing the two to fight it out.

In order find the biological father, Kiryu decided to take Haruto to Hiroshima to learn more Haruka's whereabouts while he was in prison. During his stay in Hiroshima, a local bartender named Kiyomi Kasahara helped Kiryu in taking care of him. Later on, Kiryu allowed the Hirose Family members to play with and assist in taking care on him, with Yuta (who at this point is unaware of their relation) changing his diapers most often. Kiryu would leave Haruto in Kiyomi's care whenever he needed to take care of something.

Toru Hirose kidnapped Haruto while Kiryu, Yuta, and Nagumo were tracking Tatsukawa in Kamurocho in order to lead everyone to Ryunan Shrine where he would reveal many details about the infant. During the discussion about Haruto's heritage and Haruka's escape from Onomichi, Jingweon Mafia members gathered in front of the shrine. While Kiryu takes them on, the Hirose Family members flee with Haruto, tossing the baby amongst each other as if he were a rugby ball to try and keep the enemy's hands off of him. The Jingweon were able to successfully abduct him afterwards and took him to an offshore cargo storage platform, where Joon-gi Han reveals to Kiryu that he intended to use the baby as leverage to get Yuta to assassinate his biological father Big Lo. After defeating Han, Kiryu takes Haruto back and gives him to Yuta, who apologizes to his son for his underworld ties putting him and his mother in danger.

Father and son reunited, Yuta discusses how he can protect Haruto from the Saio at Kiryu's apartment. The three later travel to Tokyo and have Makoto Date relocate him to Haruka's room, where contact with his mother causes a tear to roll from her eye and her condition to improve. Yuta would eventually find himself in the same room to watch over his son and the still-unconscious Haruka after Kiryu heads back to Onomichi. Several hours later, Haruto holds Haruka's hand, causing her to finally wake up from her coma. Later on, Kiryu would return to take Yuta, leaving Haruto with his mother under Date's watchful eye after they relocate once more, however, Jiro Honjo leads disguised Yomei Alliance members to them, causing Haruto and Haruka to be abducted.

The two are brought to a warehouse in Hiroshima, where they are held as Tsuneo Iwami's hostages and Kiryu is forced to take hits for them until the Hirose Family members come to the rescue. Iwami, after being defeated, orders Sugai to shoot the hostages. Haruka instinctively curls up around her son and Yuta runs in front of them with his arms outstretched, but it is ultimately Kiryu who takes the bullets for the three of them. Haruto and his parents gather around and watch sorrowfully as his adoptive grandfather passes out from his wounds.

One month following Iwami's defeat, the Onomichi residents say farewell to Yuta, Haruka, and Haruto as they move to Morning Glory Orphanage. The couple along with their fellow orphans help Haruto walk, with Yuta recording video footage of him. Haruto notices the declared-dead Kiryu watching and reaches out to him, but he steps out of sight before Haruka can see him. Haruto struggles walking on his own and falls but Haruka continues encouraging him and he manages to get back up on his feet and walk towards her. 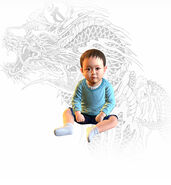