Edit
watch 02:59
Metroid Dread - The Loop
Do you like this video?
Play Sound
MAJIMA CONSTRUCTION IS AT WORK! This article is a stub and is under construction.

Masane Tsukuyama
Heizo Iwami (巌見 兵三, Iwami Heizō) is the tertiary antagonist of Yakuza 6. He is the founder and president of Iwami Shipbuilding. In the yakuza underworld, he is known by an alias: Takeru Kurusu (来栖 猛, Kurusu Takeru), the chairman of the Yomei Alliance.

Iwami is a shrewd man who built a global shipbuilding company based in Onomichi, Hiroshima from the ground up. Given this career history he would seem to be quite old, but he is an elderly gentleman whose dignity does not betray his age. Despite having relinquished control of Iwami Shipbuilding to his son, Tsuneo, his presence is still felt. Heizo did not want his son to live a life of crime, so he would work to try and dissuade him from entering the underworld.

Iwami's track record dates back all the way to the post-war era. A successful businessman, he was contracted by the military for a top-secret project in Hiroshima, which would become the Yamato Mark II. The war passed and the Yamato was of no use, so he was ordered to dismantle it to hide evidence that could lead to a government scandal. Iwami refused, and used the "secret of Onomichi" to blackmail Minoru Daidoji and gain influence in the country's politics. After the end of the war, he adopted young Toru Hirose after he trespassed the shipyard as a boy.

The secret of Onomichi is also what led to the founding of the Yomei Alliance: the purpose of the alliance was to keep the ship a secret and establish a foothold for the dirty work of Iwami Shipbuilding in Hiroshima, thus why the Yomei never needed to attempt to expand. In his position as Chairman of the Yomei Alliance, Iwami kept the Hiroshima-based yakuza clan neutral in the rivalry between the Tojo Clan and Omi Alliance. Despite keeping the Yomei firmly rooted in Hiroshima, over the years, he successfully grew the Yomei to the third most-powerful yakuza clan in Japan. His true, life-long mission is to protect the secret of Onomichi at all costs, going so far as to order the assassinations of any friends, employees, and associates that could possibly expose the secret to the world.

The conflict is largely driven by the efforts of Tsuneo Iwami, Heizo's son, to supersede him and become the next Takeru Kurusu. To this end, Tsuneo involves the Saio Triad led by Big Lo (who had historical cooperation with the Yomei for a human laundering scheme), the Jingweon Mafia led by Joon-Gi Han, and his puppet Katsumi Sugai in the Tojo Clan, to enable the Yomei to expand into Kamurocho and for Tsuneo to become a legendary yakuza.

When Iwami attempts to have Kanji Koshimizu swear an oath with Takumi Someya, he has Kazuma Kiryu act as a witness knowing he would refuse the offer.

As a result of his schemes, the Hirose Family and Kiryu end up discovering and exposing the Yamato Mark II; Japan's most classified military secret, which is the only physical proof of Iwami's collusion with war general Minoru Daidoji. Iwami commands Hirose execute his henchmen for their role in exposing the secret; when he refuses, Iwami executes Hirose himself and leaves.

Soon thereafter, Tsuneo confronts his father, revealing that he has known of his schemes for a long time. He had known since Hirose was dispatched to kill the father of Takaaki Matsunaga that he had been killing to keep the battleship a secret. As retaliation for Heizo's attempts to exclude Tsuneo from the yakuza lifestyle he strives to be in, Tsuneo has a turncoat Koshimizu execute his father, and the death is falsely reported as a suicide. 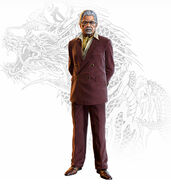