Hirata (平田, Hirata) is a minor character featured the first Yakuza, Yakuza Kiwami, and Yakuza 3. He is the former president of Peace Finance.

Despite being a loan shark himself, he has incurred debts with several families affiliated with the Tojo Clan, notorious for his inability to deliver even the interest on his loans. He plans to abandon his company and skip town, but Kazuma Kiryu and Shinji Tanaka arrive to collect his debt while he and his employees are packing. Hirata's pleas for an extension on the due date are shut down and - in a panic - he attacks Kiryu with a golf club. He is easily beaten and Shinji collects the 200 million he owed. When Kiryu was on his way to the Dojima headquarters, Hirata confronted him and demanded him to give his money back by force. However he was easily defeated for the last time.

Main article: The Photo of Truth

In the substory The Photo of Truth, it is revealed that Hirata was unable to recover from the damage to his reputation and was soon unable to find any work in Kamurocho. He abandoned his wife and two children, leaving them to shoulder his debts, and has been homeless for over a decade.

During the commotion after the Millennium Tower bombing in 2006, he snuck up behind Kiryu, intending to stab him to death. He was spotted by a photographer at the scene and fled before he could exact his revenge. He is reunited with his son Tatsuo two years later and asks his forgiveness, admitting responsibility for abandoning him and his family all those years ago. 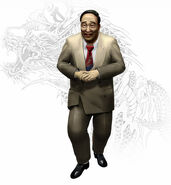 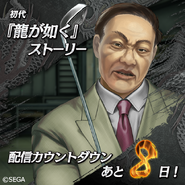 Countdown image for the release of Yakuza's story chapter in Ryu ga Gotoku Online
Add a photo to this gallery
Retrieved from "https://yakuza.fandom.com/wiki/Hirata?oldid=75423"
Community content is available under CC-BY-SA unless otherwise noted.