Lieutenant advisor of the Omi Alliance

Member of the Go-Ryu Clan

"This is the Kazuma-San I expected. I guess there's no other choice. GO! Kill this arrogant motherfucker!"

Hiroshi Hayashi (林 弘, Hayashi Hiroshi) is a recurring boss character and member of the Omi Alliance in the Yakuza series. In both of his games, he only has one appearance, which is the boss fight against him. He is first introduced in the original Yakuza and in its remake, and also appears in Yakuza 2 and that game's remake.

He is also a supporting character in the non-canon spinoff game, Yakuza: Dead Souls. He is one of the first people to be infected with DD's virus strain, named Thanatos. After being shot by Tetsuo Nikaido and injected by DD, he becomes the first prototype zombie; the Itsuki Prototype (実験体いつき, Jikken-tai Itsuki, lit. Experimental Body Itsuki).

Hayashi is tall and thin, with a similarly shaped head. He is even taller than Kiryu. He wears a dark gray suit (black in Kiwami 2 and Dead Souls) over a white dress shirt, a pair of matching black dress pants, a matching black tie and a pair of black leather shoes. His hair appears to be curly, but close-shaved similar to a Caesar haircut.

During the game's fourth chapter, he and a team of minions meet Kazuma Kiryu at Millennium Tower bar Ares. Hayashi shows himself to be polite in this exchange, patiently allowing Kiryu to take a phone call while speaking with him. He demands Kiryu hand over Haruka Sawamura; when Kiryu refuses, he battles Hayashi and his men. Although Hayashi is shown to be more powerful than his subordinates (as he is a boss character rather than a simple enemy), he proves to be no match for the Dragon of Dojima and is defeated and knocked unconscious.

Sometime after the events of the first game, Hayashi's name was struck from the Omi roster, likely related to either his failure to defeat Kiryu or his partaking in the conspiracy. Afterwards, Hayashi was recruited by Ryuji Goda into the Go-Ryu Clan; in his own words, all that mattered to Hayashi was seeing Ryuji rise to the top.

In this game, he is the leader of an eight-man unit that is sent to attack the transformer room in the Millenium Tower, which is now being used as The Florist of Sai's new headquarters. After Kiryu and Kaoru Sayama defeat his men, Hayashi unmasks himself and reveals he has left the original Omi Alliance to work under Ryuji. Kiryu and Hayashi have a one-on-one rematch. Although Hayashi appears to have gotten stronger since the previous game, now fighting alone and able to use steaming hot pipes as weapons (as well as having a significant amount of health bars), he is once again defeated by Kiryu. Impressed, he comments that Kiryu is still a beast, before falling unconscious.

He does not appear or is mentioned in the games after this scene, leaving his fate unknown in the main series.

A lone, mysterious figure in drab clothing crosses the paths of Shun Akiyama and Hana of Sky Finance, using a low-hanging baseball cap to conceal his identity. On a mission, the mystery man descends down the stairs towards the entrance of a building inhabited by members of a family under the Tojo Clan. As he calls for the underground elevator, he is soon approached from behind by an unnamed Yakuza who enquires about his intentions for being there. Silent, the figure turns and suddenly bites the Yakuza's neck, killing him. The family members residing on the top floor witness the attack through a security camera feed and draw their weapons while the elevator approaches from below. The elevator opens, prompting the Yakuza to empty their guns into the lanky and sickly looking figure. Despite multiple gunshot wounds all over his body (including a bullet to the head), the man remains standing, looking towards them to reveal his red glowing eyes. The family are slaughtered and thusly reanimated as zombies, before taking to the streets of Kamurocho to wreak havok and begin to spread their newfound infection.

It is later revealed in Part 3 that the attacker is none other than Hiroshi Hayashi of the Omi Alliance.

Hayashi appears in the lift again as Ryuji warns the last yakuza family. Once the lift opens, Hayashi disappears and they shocked, but Hayashi jumps to the top of the lift where they cannot catch him. After this, Hayashi comes down the lift as they notice him and Hayashi is on the table, ready to bite a yakuza. The yakuza shoot him, but Hayashi avoids the bullets and bites each yakuza in quick succession. Finally, he bites the yakuza officer and Ryuji counterattacks him away from the last yakuza, Hayashi jumps back, but his cap has been knocked off his head. Then Hayashi shows his face to Ryuji and says "Sweet...Death...." Hayashi subsequently tries to run away but Ryuji shoots him and then Hayashi jumps, breaking the wall.

After Hayashi is defeated, he recognizes Kiryu and Ryuji has a flashback where he had a talk with Tetsuo Nikaido and his co-conspirator, the arms dealer DD. As retaliation for Hayashi's refusal to take part in Nikaido's plan, Nikaido shot him and DD injected the zombie virus Thanatos into his neck. This made Hayashi the very first of the zombies. His last words were "Sweet...Death..." before he died. 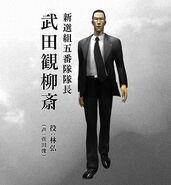 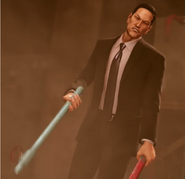