Hiroshi Horie (堀江 博, Horie Hiroshi) is a supporting character in Yakuza 5. He is Haruka Sawamura's manager at Dyna Chair.

Horie first appeared during the start of Haruka's chapter in which she accompany Haruka to her apartment after her training. The next day during the first round of Princess League, he and Haruka got scolded by Mr. Manda after the rival idol team, T-Set, purposely trips Haruka. When Horie confronts T-Set over their actions, their manager, Nakai, intimidates him and threatens Horie to not putting his hands on the idols.

After Haruka wins the first round of Princess League, Ms. Park slaps Horie and scolds him at the agency for what happened to Haruka with Mr. Manda and that she got a complain from him. He also presents when Park fires Ogita and was tasked with Haruka to find a professional dancer named Christian to serve as Haruka's new instructor.

After a long concert event, Horie and Haruka went to buy gift for Ms. Park. However, he and Park finds Haruka being terrorized by T-Set and arrives to help her. He went back to the agency while Haruka and Park hangs out for the night.

The next day, he and Haruka found out that Park has committed suicide. Shun Akiyama, who happens to be at Sotenbori at the time, helped the Dyna Chair to investigate the truth about Park's death. Unfortunately, Horie was attacked by a man named Kamon Kanai and was put into the hospital. His job was taken over by Mrs. Yamaura during his absence.

He later reappears during Haruka's concert at Tokyo Dome, also witnessing her speech. 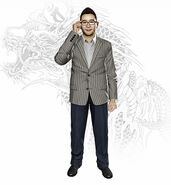 Add a photo to this gallery
Retrieved from "https://yakuza.fandom.com/wiki/Hiroshi_Horie?oldid=75429"
Community content is available under CC-BY-SA unless otherwise noted.