Kugihara is a twisted and psychotic individual, constantly assaulting Saejima with his men, showing incredible delight in each opportunity going as far as piercing an open wound on Saejima's body with his fingers while drinking the blood from the tip of them. He has an infamous reputation of being a creep and an insane individual, so much that the very inmates both fear him and dislike him. Kugihara is cruel and ruthless and has little to no care of whom to use or get involved in order to achieve his goals as he initially framed Shigeki Baba of an assault done by his own man in order to provoke Saejima further.

Despite his more than vile nature, Kugihara seems to be a coward at hand as he only resorted to truly fight Saejima (the first time letting himself being hit to extend his parole) with the support of other 100 inmates, and he begged for mercy as Saejima pulverized his left hand and resorted to using a firearm when everything else failed. He also employs dirty tactics in fighting such as striking from the back which further emphasize his foul nature.

Kugihara is a pale, with a lean build. He wears the usual prisoner outfit which consists of a basic green suit. His most noticeable traits are his bald head and the large scar across his left eye, which give him a rather menacing appearance which complements his already creepy infamy. His left eye appears to be blind, likely from the same injury that gave him his scar.

Not much is known about Kugihara, except that he was sent to the same prison as Saejima 6 months ago before his current serving time on the place. For initially unknown reasons he started assaulting Saejima with his men on a weekly basis. He and his group were known as the woodcrafting crew and had access to tools.

Kugihara would be first seen performing another harassment on Saeijma after having his men hold him by the arms. He would unbutton Saejima's shirt revealed his already beaten body and sadistically piercing a still fresh injury on Saejima's abdomen causing him deep pain while taking maniacal glee, and proceed to give him another beating. Saejima revealed to be enduring the punishment in order to get out on Parole.

As he didn't seem to be provoking Saejima deep enough, he had his men carry fellow cell inmate of Saejima Shigeki Baba and ordered him to assault Saejima on his sleep during the night. Baba refused prompting Kugihara to stage an elaborate plot in which Baba was framed from stabbing one of Kugihara's men, thus potentially denying his parole as punishment for his disobedience.

Saejima after gathering enough proof confronts Kugihara with the psychotic man revealing his motives, causing Saejima to be unable to tolerate any of more injustice not caring about saving his own skin anymore and beats Kugihara. However he reveals in delight that all he wanted was to provoke Saejima into a confrontation so that his parole would be denied and extend his sentence.

This scheme failed as Kosaka would eventually support Saejima and Baba on escaping since he suspected some major plot was behind Kugihara's movements being tied to Tojo Clan as being the only possible party with power enough to influence the Ministry of Justice to deny Saejima's parole, added that Goro Majima was reported dead in the media, therefore revealing Kugihara's origins as a member of a traitorous cell from the Tojo Clan that wanted to prevent Saejima from getting revenge on Majima's behalf.

However Kugihara anticipated this and had the newly 100 inmates intercept Saejima while he himself stabbed Kosaka on the back as he would warn Saejima of the trap. Saejima fought but (respecting Kosaka's character) decided not to kill any of them but give them a sound beating to all of them with the help of Baba. Kugihara himself would do fight and confident on his victory as more reinforcements would come. Saejima however easily defeated Kugihara and proceeded to stomp his left wrist till is was broken causing it to burst in blood, telling him to either cut it or burn as he would be alive at the end (suggesting that with the cold climate, his arm would suffer from either Frostbite or Gangrene). Kugihara begged not to kill him and Saejima said he wouldn't but that he picked a fight with a Yakuza and thus should have been prepared for the consequences. As the duo leaves, Kugihara attempts to gun Saejima from the back but has his own body holed by a revolver, courtesy of Saejima's cellmate Himura.

The second time you have to fight through a sea of prisoners before you actually end up fighting him; accompanying him is a mook with Tamashiro's (Yakuza 3) moveset and another mook grunt; his health in this fight has increased compared to the first fight

Kugihara's style seems to be sloppy and based off of moves from drunken boxing, except worse, it (kinda sorta not really) is similar to Daisaku Minami (Yakuza 4). 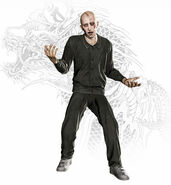