This is a historical Japanese name; the family name is Inoue/Serizawa.

He is the captain of the sixth unit of the Shinsengumi.

Inoue Genzaburo was originally called Serizawa Kamo. He adopted the identity of Inoue Genzaburo a year before the events of Ryu ga Gotoku Ishin! after killing the real Inoue, along with the real Okita Souji and Nagakura Shinpachi. Shinsengumi chief Kondo Isami realizes that if word gets out that the three Mito faction members are dead, it will be the end of the group. He thus requests Kamo, along with Hirayama Goro and Hirama Jusuke, assume the identities of Inoue, Okita, and Nagakura respectively. 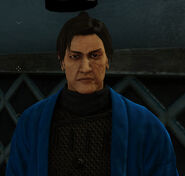 Real Inoue Genzaburo.
Add a photo to this gallery
Retrieved from "https://yakuza.fandom.com/wiki/Inoue_Genzaburo?oldid=74127"
Community content is available under CC-BY-SA unless otherwise noted.