The Ueno Seiwa Clan isn't interested in money. It's simply a matter of saving face as yakuza.
— Katsuragi, Yakuza 4

Isao Katsuragi (葛城 勲, Katsuragi Isao) is the secondary antagonist of Yakuza 4. He is the lieutenant of the Ueno Seiwa Clan and one of few survivors of the shooting in 1985.

In 1985, when he was 22, Katsuragi was a member of the Ueno Seiwa Clan. According to Sugiuchi, he and him were blood brothers at that moment. He conspired with Shibata to sacrifice his own members in exchange for allowing Shibata to rise in prominence.

During the Yoshiharu Ueno hit, he attended the meeting alongside all 18 of Ueno Seiwa members, including the chairman, Yoshiharu himself. Suddenly, Taiga Saejima bust in through the door and shoots everyone inside, including Katsuragi who attempts to protect his chairman, only to be shot in the chest. However, it turns out that the revolvers that Saejima used were actually loaded with rubber bullets, which only render the Ueno Seiwa members unconscious instead of killing them. With the chairman still passed out, Katsuragi uses his own gun, which was loaded with real ammunition, to kill the rest. He then instructs Sugiuchi to shoot him in the shoulder, so as not to look suspicious while making himself look selfless in front of his Patriarch, earning himself a promotion to lieutenant.

However, when Sugiuchi hands over the report to Munakata, he realizes that the report was fake. He blackmails Sugiuchi to introduce him to Katsuragi so that his false report will be covered up as true.

After Ihara, another member of the organization, is killed by Arai of Kanemura Enterprises, Katsuragi complains to Daigo Dojima, 6th chairman of the Tojo Clan. He asks for the rights to Kamurocho Hills as compensation, but was refused. With few options, he sends Yasuko (under the name Lily) to retrieve the money for him with the promise of being able to be reunited with her brother.

In chapter 3, Tanimura opts to make a deal with Katsuragi using the 100 million yen that Yasuko loaned from Akiyama to let her go. While they're making a deal, Katsuragi is revealed to be the true culprit in the shooting 25 years before during the conversation with Tanimura. After spilling out the truth, he orders his men to kill Tanimura and retrieve the money. Although with Hisai and Sugiuchi's help, Tanimura manage to escape.

In chapter 4, Katsuragi learns that Taiga were holding up in Purgatory. He leads his goons to attack the place and capture Taiga Saejima (in which he also injures Kage and the others). Katsuragi reveals the truth of the hit to Saejima before revealing that his friend Kido, is actually working for him and secured Akiyama's 100 billion yen. Unfortunately, Akiyama and Tanimura lead Yasuko to Purgatory without knowing his presence there, and ends up being captured as well.

Katsuragi plans to betray Munakata by blackmailing him using the sensitive file that Hamazaki stole from the Okinawa Penitentiary No. 2, which contains the proof of his involvement in Tojo Clan's missing 10 billion yen. Katsuragi gets a call from Kiryu in which he asks him to make a trade of the file with Taiga, Yasuko, and Akiyama's money. Katsuragi agrees but not before challenging Kiryu into fighting his ways through the entire members of Ueno Seiwa clan into the top of Kamurocho Hills.

After defeating 4 high-ranking Ueno Seiwa members, Kazuma Kiryu catches up with Katsuragi in the rooftops, where he was seen with the tied up Taiga and Yasuko. Kido also appears with the 100 billion yen in cases. Kiryu gives him the file containing information about the stolen money and Kido returns Yasuko to him. Katsuragi then orders Kido to shoot her and Kiryu, but he turns and shoots Katsuragi in the chest instead, revealing that he's still loyal to Arai before ends up getting shot in the stomach.

Yasuko frees Saejima, who warns them that Katsuragi is wearing a bulletproof vest, as he had anticipated it. Saejima tackles Katsuragi who begins to insult Sasai and himself. Saejima attempts to attack Katsuragi, but spares him instead. However, Katsuragi shoots at Taiga in the arm, and attempt to shoot again until Yasuko shields Taiga and took the bullet instead. Before dying, she slowly approaches Katsuragi, in which he becomes scared of Yasuko and begged her for his life. Yasuko takes the revolver given to her by Tanimura and shoots Katsuragi in the head, killing him instantly. His death puts an end to Ueno Seiwa once and for all. 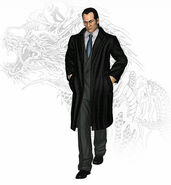 Add a photo to this gallery
Retrieved from "https://yakuza.fandom.com/wiki/Isao_Katsuragi?oldid=75439"
Community content is available under CC-BY-SA unless otherwise noted.