Edit
watch 02:56
Raise a Floppa - The Loop
Do you like this video?
Play Sound
This article is about the attorney employed by Genda Law Office. For the chairman of the Seiryu Clan, see Ryuhei Hoshino.
MAJIMA CONSTRUCTION IS AT WORK! This article is a stub and is under construction.

Joe Zieja
Issei Hoshino (星野 一生, Hoshino Issei) is a supporting character in Judgment and Lost Judgment. He is a defense attorney working at the Genda Law Office.

Hoshino wears a navy blue suit over a white dress shirt. He has a medium-length hair and can be seen wearing a black backpack whenever he is outside of the office.

Really, I can't do much... I don't even know what kind of lawyer I want to be. Criminal, Civil... Not the slightest idea. But if there's one thing I do know... I'm not a lawyer who sits on his hands after his friend gets murdered.

Hoshino passed the bar examination with flying colors on his second attempt. He became a lawyer for Genda Law Office between 2015 and 2018.

Saori Shirosaki accuses him of eating her special cake that she had left in the fridge at Genda law office. She decides to rope in Mafuyu Fujii and Takayuki Yagami as prosecutor and defence lawyer respectively for a makeshift "trial." After investigating the "crime scene," Yagami successfully manages to argue that in fact no-one had eaten the cake: it had gone off after the fridge had been deprived of power for a number of hours the previous night, and Ryuzo Genda had thrown the contents out as part of his first time on cleaning duty.

Hoshino accompanies Yagami on a trip to the ADDC to see who Shintani called.

Hoshino accompanies Saori in being the defense for Akihiro Ehara, whose sexual battery trial causes a commotion as he reveals the discovery of the corpse of his son's bully, Hiro Mikoshiba. Eventually, a video of Ehara murdering Mikoshiba at a time too close to the sexual battery to be valid goes viral, further complicating the case.

Hoshino accompanies Yagami to Ikebukuro Station to try and find a lead. They retrace Ehara's steps on the day of the groping, leading them to take a train to Shinjuku Station and there, make a diagram of all the security cameras. Once the diagram is complete, a blind spot in the monitored areas is found, which would enable an Ehara impostor to swap places. When they review their evidence, Hoshino does a background check on the victim Yui Mamiya, and discovers she attended Kurokawa Academy, which Yagami notes is linked to multiple involved parties.

Further research into the academy leads of a discovery of Mitsuru Kusumoto being bullied by Shinya Kawai. Hoshino and Saori both start looking further into Kawai. Saori chooses to investigate by looking around town, and Hoshino offers to accompany her, but she declines.

Hoshino is present when Mamiya confesses the groping was staged using the blind spot for the fake Ehara to swap places with the real one. Later, he notes that Daimu Akutsu is present in Kamurocho and will personally give a bonus to any hostess performing well at any RK-owned club. He and Genda are sent by Yagami to Queen Rouge to pose as customers and increase Saori's sales numbers to ensure she gets Akutsu's bonus. When they all return to the office, Hoshino and Genda accuse the other of having that idea.

To look for anything that could convict Ehara of murder, Hoshino and Higashi meet Ehara's wife for details, though, as she had not remianed in contact with him after their son's suicide, she has no information. He prays at the altar for Toshiro, completely unaware of the fact that it hid the knife used to kill Mikoshiba.

Hoshino is present for Ehara's retrial in 2022. When all is settled, he recounts the events that took place with the others at the office, as well as the resulting high-profile arrests.

Hoshino works with Saori and Kaito to bust the Bato Detective Agency by manipulating Shiro Senda, who Saori had hired to look into Hoshino. Hoshino is able to make Senda admit to extorting clients, and has the conversation recorded. Though he and Saori often feel distant, Kaito encourages him to propose to her. Later, Hoshino turns down an invitation for drinks from Kaito due to having work to take care of. 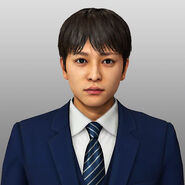