Revision as of 00:52, 11 June 2021 by Manarchy (talk | contribs) (Adding categories)
(diff) ← Older revision | Latest revision (diff) | Newer revision → (diff)
Edit
watch 02:36
Wiki Targeted (Games)
Do you like this video?
Play Sound
MAJIMA CONSTRUCTION IS AT WORK! This article is a stub and is under construction. You can help the Yakuza Wiki by expanding it.

Jin Goda (郷田 仁, Gōda Jin) is a character in Yakuza 2/Yakuza Kiwami 2. He is the fifth chairman of the Omi Alliance, and the adoptive father of Ryuji Goda.

Goda is a reasonable person, shown when he agreed with Kiryu's truce offer, despite the Omi Alliance's eagerness to wage a war against the Tojo Clan. However, he has difficulty controlling the organization since it has become too big for him to handle. In contrast to all of the other major characters in the alliance featured in Yakuza 2, Jin is shown to both peaceable and honest, not willing to go to war with the Tojo (unlike Ryuji, Sengoku and Ibuchi), and not willing to use deception to his own ends (like Takashima).

Despite his disheveled and frail appearance, he is much stronger than he appears, as he was able to stand up from his wheelchair and defeat Ryuji in a battle, despite Ryuji being armed with a katana when they were 57 and 22 years old respectively in Ryu ga Gotoku Online, 8 years prior to the events of Yakuza 2.

He has long hair and an equally long beard. He wears a gray kimono, socks and sandals. He is confined to a wheelchair as of the events of the game.

At one point during the 1980s, he met a Korean named Suyeon, who wanted him to take care of her infant son as she fled the country to seek for safety after the 1980 Jingweon massacre. He adopted this infant son as Ryuji Goda. After Yukio Terada swore his oath to the Omi Alliance, Shintaro Kazama (who spared Terada during the massacre) begged Goda to look after him. Goda agreed and allowed Terada to join the alliance.

For some time, Goda served as the first chairman of the Omi's Go-Ryu Clan. Eventually, after Ryuji Goda joined the alliance, he became the clan's second patriarch.

In the aftermath of Terada's death, Daigo Dojima and Kazuma Kiryu travel to Sotenbori to meet Goda at the Omi headquarters. Along with Terada's sworn brother (and replacement as their Chief of HQ), Ryo Takashima, Jin supports peace, though they are disagreed with by the more militant young blood in the alliance such as Toranosuke Sengoku and Ryuji. Ryuji stages a coup d'etat against the alliance during the meeting, kidnapping both Daigo and Jin.

Jin remains kidnapped by the Go-Ryu clan, which has splintered from the alliance, for most of the game. This leaves him unable to prevent their conflicts with the Tojo Clan and Kiryu during most of the game's events, during which Sengoku is killed by Ryuji. Jin does not appear again until the final chapter atop Kamurocho Hills, where he reveals the truth about Ryuji's original family. He took Ryuji in at the request of his biological mother Suyeon, wife of the Jingweon boss, and mother of Kaoru Sayama.

Jin then witnesses Kiryu duel Ryuji, only to lose. Afterwards, Terada appears, revealing that his death was faked, and that he is a member of the Jingweon Mafia that was trying to have the Omi Alliance destroy the Tojo Clan in the Jingweon's plot to take revenge on the Tojo Clan in retaliation for the Jingewon Massacre of 1980. After Kiryu subdues Terada, Takashima appears, revealing that he had been cooperating with Terada for a long time and had been aware of his Jingweon association. It as this point that Takashima kills both Terada and Jin, as he plots to take control of both yakuza groups and the Jingweon to his own ends. After Jin's death, Takashima was killed by Ryuji, who then died from Takashima's bullets after losing a final time to the Dragon of Dojima. 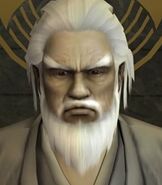 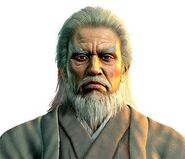