"When your chairman tells you to do something, you damn well do it. And the CIA is my "chairman." They say I need to kill someone, no matter the target... I'm going to kill them."

Joji Kazama (風間 譲二, Kazama Jōji)[a] is a supporting character in Yakuza 3. He is a CIA agent.

Joji bears an uncanny resemblance to his brother, Shintaro. He has a considerably fit physique given his age. He has black (going gray) slicked back hair and a moustache.

When it comes to work, Joji is a no-nonsense, result-oriented person, as he wants to get the resort deal to go smoothly.

Based on Ryuzo Tamiya's account, Joji was an elite cop, working for the National Police Agency's Foreign Affairs and Intelligence Department in the past. Thirty years before the events of Yakuza 3, Joji emigrated to USA to avoid persecution due to his brother's yakuza background, earning a fresh start as a CIA agent working in their Far East division.

Joji initially appears in the game after presumably shooting Daigo Dojima and Shigeru Nakahara, though in reality it was his less patient partner Andre Richardson who shot them. Nakahara's shooting was witnessed by his adoptive daughter Saki, who was able to remember Joji's face and draw an accurate sketch of him. Due to his near identical appearance to his deceased brother Shintaro Kazama, and no previous knowledge of Joji's existence, Kazuma Kiryu presumes that his mentor and father figure survived his death in 2005.

Joji reveals that he is in fact Shintaro's brother when he shoots Lau Ka Long in the head to save Kiryu and Rikiya Shimabukuro, but because he is speaking English, Kiryu does not understand him. It is only later that Kiryu finds out his relation to Shintaro during a meeting in Tamiya's ministerial office.

Joji is instructed to shoot Shoyo Toma in Okinawa, and Kiryu is sent by Tamiya to stop him. Due to Kiryu's intervention, Toma is able to escape, but Joji is still dead-set on killing him, so the two duel it out. Kiryu and Joji are both exhausted after the latter is defeated, and Kiryu remarks that he would not have won had Joji been in his prime. After Joji regains consciousness, he explains to Kiryu the situation regarding Black Monday and the two are later interrupted by Taichi, who rushed to find Kiryu to tell him Yoshitaka Mine and the Tamashiro Family had destroyed Morning Glory Orphanage. Before Kiryu leaves, Joji tells him he will arrange for transportation to Kamurocho.

At the bullring, Kiryu has fought and defeated Tetsuo Tamashiro to rescue Nakahara, but because he turned his back to Tamashiro, is unable to see him reach for his gun, causing Rikiya to jump in front of Kiryu to take the bullet. Joji arrives and shoots Tamashiro in the head, killing him instantly, but he arrived too late to save Rikiya, who dies from his wound.

Kiryu travels to an Okinawa airfield with Haruka Sawamura, Joji having prepared a high-speed jet for them. Kiryu offers to shake Joji's hand before his departure, but Joji declines, saying he will wait until the mission is complete. After Mine has thrown both himself and Richardson - who was secretly the leader of Black Monday - off the roof of Touto University Hospital, Joji (with Haruka) arrives in a helicopter for Kiryu.

He is presumed to have returned to the United States afterward, as his mission was accomplished.

Joji shows proficiency in hand-to-hand combat, relying on precise attack combos. He is also a proficient fighter and marksman, given his government agent background 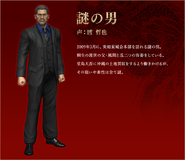