Joon-gi Han (ハン・ジュンギ, Han Jungi) is an antagonist in Yakuza 6. He is the leader of the Jingweon Mafia and the proprietor of Stardust.

Joon-gi is a considerably stylish person. He has bleached hair and wears a suit jacket over a bare chest, a golden double chain necklace, a pair of black dress pants and a pair of dark blue loafers. He is also seen sporting considerably thick eyeliner.

Joon-gi appears as a man with good manners that matches his looks. He also has a knack for business, being able to rapidly expand the organization by relying on the sex industry.

On the other hand, he's also a cruel and moody person, not bothering to kidnap Haruto, to a point where he threatened to kill him. He also holds a personal vendetta against Kiryu for nearly eliminating the organization in the previous years.

While not much is known about Joon-gi's past, it is revealed that he has a knack for business, being able to create an entirely new market within the nightlife industry by introducing more sexualized services for the Stardust host club.

Joon-gi was first encountered during Kiryu's meet with Yuya at a Japanese barbecue restaurant. After punishing the club's henchman for causing trouble for Kiryu at Stardust, he politely invited the group to Stardust as an apology.

Upon invited, he led the way to Kiryu and Yuta. He purchased Stardust from Kazuki and Yuya and decided to revamp it by refurbishing the main hall and adding a basement area that serves as the cabaret area, with more sexualized services and a center stage, where Joon-gi invited Kiryu to a ring fight, which Kiryu initially declined, but after seeing Yuta's defeat, he accepted the fight, under the condition that Joon-gi will provide information about Tatsukawa. Impressed at Kiryu's victory, he asked the club to applaud him as a sign of sportsmanship and offered Kiryu a handshake.

After the defeat, he tipped Kiryu that Tatsukawa left the club after Joon-gi acquired the business. He also revealed that Tatsukawa traveled to Kamurocho not to become a host, but as an informant for a Chinese syndicate instead and used his job as a host to hide his connection to the Chinese mafia. Before Kiryu left Stardust, Joon-gi told him that Tatsukawa still lives in Kamurocho.

Later on the game, Joon-gi met Kiryu in Hiroshima after the Hirose family got ambushed by a number of unknown men. There, both were engaged in another duel.

Kiryu's final encounter with Joon-gi happened on board a ship. Before the final fight, Joon-gi revealed that it was Tatsukawa who caused the accident in Kamurocho, and that Haruto would be dead if not for Haruka protecting him during the crash. Shortly after the fight, an unknown person (later revealed to be Hirose) shot Joon-gi in the head, killing him.

Kim Yong-Soo underwent plastic surgery after swallowing a drug given without his knowledge by his father, assuming Joon-Gi Han's facial features. After his death Kim Yong-Soo starts suffering from an identity crisis which will make him take over Joon-gi Han's identity.

Joon-gi is a strong fighter. He can easily defeat Yuta Usami. His moves are primarily based on boxing. He doesn't quickstep during fighting, relying on evasion and blocks as means of defense. But in the final battle with Kiryu, Joon-gi uses illegal boxing moves to fight such as stomping on feet, eye poking and punching under the waist. 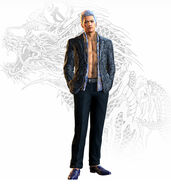 Add a photo to this gallery
Retrieved from "https://yakuza.fandom.com/wiki/Joon-gi_Han?oldid=78153"
Community content is available under CC-BY-SA unless otherwise noted.