watch 03:41
Wiki Targeted (Games)
Do you like this video?
Play Sound

Dream all you like, but I'll teach ya how far dreams get when you're up against real power.
— Kamon Kanai

Kamon Kanai (金井 嘉門, Kanai Kamon) is a major antagonist in Yakuza 5. He is the Captain of Osaka Enterprises.

Kanai is a mostly silent and serious individual who tries to get his job done quickly and efficiently. He is shown to be cruel as he is not above torturing and murdering as he even amputated one of Ogita's arms and felt nothing for killing him. He has shown to have very little honor as he was willing to kidnap and torture Haruka in order to get the information he needed from her, and is very often seen fighting with his underlings.

Kanai is a large and severely bulky middle-aged man. He is always seen wearing a deep black outfit with a red shirt and a yellow-black cross tie. After his second encounter with Akiyama he has a burnt scar above his left eye.

Kanai first appears when Akiyama and Haruka were investigating Mirei Park's death, where they find that Horie was thrown from the building. Akiyama and Haruka pursue the apparent perpetrator only to find Kan Ogita. Akiyama denies Ogita his escape and the two battle, with Ogita defeated. At the same instant Kanai appears pointing a gun at Akiyama but Haruka tosses an extinguisher at him causing him to lose his gun. Akiyama kicks him on the face but he is seemingly unfazed. Kanai fights Akiyama and is barely defeated, taking his gun with him and claiming he wouldn't forget Akiyama's face while Ogita escaped.

At some point before this encounter he had hired Ogita to find Park's letter that would reveal the location of Goro Majima, Park's ex-husband. Ogita failed to extract the information from Park, which along his accumulated anger at being fired by Park after modifying his contract that would deny him reimbursement, he smashed her head on the hallway causing her death. Kanai then hired a forger to fake a suicide note.

During some point he captured the elusive Ogita and amputated his right arm with industrial machinery having his men ready him to burn him alive.

Kanai is later encountered at Osaka Enterprises, a disposal company that was linked to the Omi Alliance, that is being truly owned by Naoki Katsuya, who was Kanai's chairman. Akiyama fights his way and finds the weakened Ogita who confesses Kanai's involvement in Park's death. While Akiyama creates a diversion for Ogita to escape, he is captured and killed by Kanai. He later appears before Akiyama making the revelation that he had sent his men to kidnap Haruka to get the letter's location from her. He escapes while his men face Akiyama.

He appears before Haruka, chastising one of his men for being unable to extract the information from her, and being ready to "do whatever it took" to get what he wanted. Before he could do anything Katsuya appeared before Kanai punching him in the face and confronting his lieutenant about his unsanctioned action letting Haruka return to Dyna Chair knowing that Kanai was in fact working behind the scenes for Tsubasa Kurosawa.

Eventually Katsuya makes a secret phone call to Haruka in order for her to deliver the letter to him in person alone, threatening to harm the Morning Glory Orphanage if she didn't comply (while in truth he wanted to get the letter before Kanai could while ensuring her safety). However Kanai acted before Katsuya could reach Haruka and surrounded her along his men at the Shin-Osaka Station. Kanai threatens Haruka but she does not yield while covering her purse giving him the hint where the letter was trying to take it from her. Akiyama however appears and intercepts Kanai. Akiyama mocks Kanai for being underhanded and lacking dreams but Kanai does not care as all he desires is to make money through his vile actions. Akiyama faces Kanai and his men, and is able to defeat them. He then takes Haruka with him to Tokyo by taxi as taking the train owned by Katsuya is likely to be trapped. Katsuya watches from afar without interfering.

Katsuya later confronts Kanai about his unauthorized participation with Kanai hiding his true motives apologizes saying he only did so knowing that Akiyama would appear there. Katsuya inquiries whether he thought he couldn't handle Akiyama but Kanai merely says he only did so as a precaution. Katsuya remains calm knowing they can still take the letter from her anyway. Katsuya walks and ignited a cigar for Kanai before suddenly choking him from behind stating his conclusion that whether in the entertainment business or in life overall, a face is the first thing seen by people and thus how one is judged like, something he came to know as he performed as an actor. He then stated his disappointment at Kanai for being unable to scare a girl like Haruka and therefore concluding that such a yakuza is useless before taking the cigar and burning Kanai above his left eye leaving him a scar.

Kanai would appear much later in the game in Kamurocho Hills after Kazuma Kiryu, Taiga Saejima, Masaru Watase were all summoned by Katsuya in order to fight each other out to lure the true mastermind into thinking they would kill each other as he wanted. To their surprise they find that Kurosawa was the true perpetrator gunning them from a parallel building. After Daigo Dojima seemingly corners Kurosawa with his own gun, Kanai shoots Dojima from behind in his abdomen revealing his true allegiance to Kurosawa betraying Katsuya. He and Kurosawa leave after the latter hints that he was going after Haruka.

Kurosawa leads an army of men at the front of the Millennium Tower where they had announced through television that Majima was taken hostage therefore luring Kiryu and company while also provoking the Majima Family in order to lay the blame into the Majima Family for the ensuing war. Kiryu and Akiyama fight Kanai and his men while Saejima and Tatsuo Shinada would go to secure Majima and Haruka respectively. Kanai fights his way but is temporarily defeated by Kiryu and Akiyama forcing his retreat with the two in hot pursuit.

After the two fight their way until reaching the Theater District, Kanai appears in person with several man while equipped with a knife. Daigo informs Kiryu that he should go to the Tojo Clan's HQ in order to find one of their enemies and that everything would be revealed there. Akiyama offered to settle the score for good with Kanai facing him and his men alone wondering if he could become a legend too.

Akiyama is successful and defeats Kanai, but he eventually manages to stand up and attempt to continue the fight telling Akiyama that reinforcements were on the way. He would spot several yakuza coming his way but much to his surprise none of them were his men but rather the joint alliance of the Yamagasa family lead by Tadashi Madarame, the Kitakata family led by Daizo Kitakata, and Watase along with his men. Watase declares they all had defeated the bulk of Kurosawa's men as they all shared a bond with the Tojo Clan by being connected with Kiryu, Saejima and Daigo and that Kanai was on the "shit list" of every yakuza in the country. A helpless Kanai is unable to contain his shock and falls on his knees. He is later arrested and incarcerated.

Kanai is described by Kan Ogita as "being a tank". True to this description Kanai is extremely durable and resilient and is difficult to knock down. He employs slow but consecutive punches that can end in a rather long combo.

Sometimes when attacked while he blocks he will retaliate with a counter using his fortitude causing the attacker to become stunned briefly giving him time to assault his opponent. Sometimes he readies himself and performs a tackle at his opponent. His grab is fairly strong and will often end with a precise strike on the head that will knock the opponent down.

During his final encounter he employs a knife which he uses with certain proficiency as he can launch several slashes in quick succession. He also uses as stab and headbutt attack. When his knife is knocked from his hand he will resort to his usual fighting style. 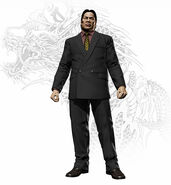 Add a photo to this gallery
Retrieved from "https://yakuza.fandom.com/wiki/Kamon_Kanai?oldid=101319"
Community content is available under CC-BY-SA unless otherwise noted.