In Yakuza 0, he wears purple vest over black long-sleeved T-shirt, a pair of red pants, a pair of yellow-rimmed vanity sunglasses, a pair of black leather shoes, and a gold chain necklace.

In Yakuza 5, he wears a black vest over white long-sleeved T-shirt, black dress pants, black leather shoes, and a silver chain necklace. His eyebrows in Yakuza 5 appear to be sculpted.

In both appearances, he keeps his hair in a low ponytail.

After beating Maiko in a dance battle, Kazuma Kiryu makes himself known as a formidable dancer at Kamurocho's Maharaja and learns of an extremely skilled Osakan dancer who is revealed to be Ogita. After his defeat, Ogita returns to Osaka in the hopes of becoming a dance coach.

Ogita first appears when he helps train Haruka Sawamura in dance, afterwards he turns off the music and tells her that she is not moving with the rhythm. He encourages her to quit; Haruka refuses and stubbornly redoes her routine. Ogita then stops and gives her a five-minute break. He continues to train Haruka up until the first round of Princess League finals. After Haruka passes the first round, Mirei Park fires Ogita because she thinks he's not a talented instructor. Ogita complains and becomes infuriated when he realizes that he was tricked into signing Park's contract, and angrily leaves Dyna Chair.

Later, he is confronted by a man named Kamon Kanai, the right-hand man of Naoki Katsuya of Osaka Talent, who coerces him into stealing the letter that Goro Majima had sent to Park. While looking for the letter, he is caught in Park's office, and, in a panic, accidentally kills her. He and Kanai cover up the murder to look like a suicide, with Kanai forging a false letter in Park's handwriting.

Due to his failure, Kanai amputates Ogita's arm and leaves him to die at a warehouse. Shun Akiyama finds Ogita who begs him to help him escape, promising that he will confess to the murder. Akiyama allows him to escape, but Ogita gets captured again and killed by Kanai.

His fighting style is heavily based on Capoeira, combined with his proficiency in knife-wielding.

In game, Ogita is always waiting for the player character to start their attack. If they attempt to attack Ogita, he sidesteps and always follows up with a Command grab with his legs. Ogita sometimes goes for tripping the player character. He is rarely seen doing combos with his knife. He does a dance known a the flare used as a "get off me" move if he is ever pressured. he has super armor in his attacks and in his command grab as well.

His only weakness is usually with well-timed sidesteps. He does a sidestep before his command grab; this is the active character's chance to sidestep from his grab and counter (if possible). The character can try to use a tiger drop related move, but this is much more risky. 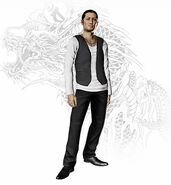 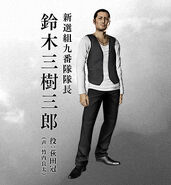 Add a photo to this gallery
Retrieved from "https://yakuza.fandom.com/wiki/Kan_Ogita?oldid=75453"
Community content is available under CC-BY-SA unless otherwise noted.