Ayumi Tanida
Kanji Koshimizu (小清水 寛治, Koshimizu Kanji) is a character featured in Yakuza 6. He is the Captain of the Yomei Alliance, the prevailing yakuza group in Hiroshima, and the Patriarch of its subsidiary family the Koshimizu Family.

Koshimizu is a levelheaded man who is dedicated to preserving the Yomei Alliance's control over Hiroshima's underworld. Despite his high position within the organization, he often joins his men in battle when they opportunity for a challenging fight emerges, such as when the Yomei come into conflict with the Tojo Clan's legendary fourth chairman, Kazuma Kiryu.

Despite his cold exterior and seeming ruthlessness, Koshimizu is has shown an aversion towards needless cruelty and despises the way yakuza bosses punish and harm their subordinates without cause.

He wears an all-red suit over black dress shirt, a gold chain necklace and a pair of black dress shoes. He has a buzz cut hairstyle.

Not much is known about Koshimizu's background prior to the events of Yakuza 6. All that is stated about him during the game is that he joined the Yomei Alliance, and eventually rose through the ranks and became successful enough to have his own family.

The Koshimizu Family quickly became the Yomei Alliance's most profitable and feared subsidiary, so Chairman Heizo Iwami selected Koshimizu as his successor to the Yomei Chairmanship and started mentoring him so that he could take over once he passed away.

In 2016, Kazuma Kiryu comes to Hiroshima while searching for the father of his adoptive daughter Haruka Sawamura's baby, Haruto. While in town, he befriends the members of the Hirose Family, a Yomei subsidiary. One night, the family's lieutenant, Takaaki Matsunaga gets into a fight with some employees of Iwami Shipbuilding and Kiryu ends up beating them up to save Matsunaga. Since Iwami Shipbuilding is the largest employer in town and have Yomei Alliance protection, Koshimizu is informed about the fight and he travels to the Hirose Family office with the intention of making Matsunaga cut off one of his fingers as punishment. After Kiryu meets with Koshimizu and takes responsibility for the fight (and after Matsunaga's boss, Tsuyoshi Nagumo, punches his subordinate a few times), Koshimizu decides to spare the Hirose man from mutilation.

Kiryu encounters Koshimizu again a few nights later, when he and the Hirose Family men break into the Royal Senkoji Hotel to rescue Kiyomi Kasahara, whom they believe had been kidnapped by her ex-husband, Takumi Someya. As it turned out, Kiyomi had been taken not by Someya but by Koshimizu on orders from Chairman Iwami. Koshimizu and Someya will swear an oath of brotherhood and formalize a partnership between the Yomei Alliance and the Tojo Clan, and Chairman Iwami wanted to have Kiryu serve as witness and approve of the partnership in order to dissuade the Omi Alliance from objecting. Since he knew Kiryu would reject the proposal outright if he was just told about it, he pretended to kidnap Kiyomi in order to get Kiryu to have a meeting with him. Ultimately, Kiryu refused to approve of the partnership regardless.

A few weeks after that meeting, Chairman Iwami orders Koshimizu to kidnap Haruto, in order to keep him out of the hands of his son, Tsuneo Iwami, who also wished to kidnap the baby for his own plans to overthrow his father. Koshimizu and his men scoured Onomichi in search of the baby but they were unable to find him, since Patriarch Toru Hirose had taken the baby and gone into hiding once he caught wind of what Koshimizu was up to. While searching for the baby, Koshimizu got into a fight on the street with Kiryu, who was also looking for Haruto. The fight was ultimately interrupted when Nagumo knocked out Koshimizu by hitting him in the back of the head with a bottle.

After Kiryu and the Hirose soldiers expose the secret of Onomichi, the blackmail material which Chairman Iwami had been using for decades to maintain his political connections is gone. In light of this, Tsuneo is able to finally displace him and seize control of the Yomei Alliance. In order to prove his loyalty, Koshimizu complies with Tsuneo's order to kill the Chairman, and the death is framed as a suicide.

On orders from Tsuneo, Koshimizu kidnaps Kasahara once again to force her ex-husband, Someya, to assassinate Kiryu atop the Millennium Tower. After Someya fails, Tsuneo and Katsumi Sugai (Tsuneo's puppet in the Tojo Clan), observing the situation from afar via a video feed, offer to spare Kiyomi if Kiryu kills Someya before he counts to three. Since Kiryu cannot bring himself to do it, Someya commits seppuku with his own blade to appease them. After a few words from Someya, Tsuneo and Sugai leave the room. Koshimizu then sadistically remarks that Tsuneo had counted to three, so he pretends to shoot Kiyomi while simultaneously turning off the video feed. This motivates Kiryu and Nagumo into launching a suicidal mission with the intent to murder Sugai, Iwami, and anyone else that stood in their path.

During the official Yomei Alliance funeral for Chairman Iwami, Kiryu and Nagumo raid the procession before Tsuneo can proclaim himself the new Chairman. Tsuneo orders Koshimizu and his men to kill the two interlopers, but they are unable to do so. While he is lying on the ground and pleading for Kiryu and Nagumo to wait, Kiryu delivers a brutal punch that knocks him unconscious.

In the aftermath of Tsuneo's arrest, Koshimizu succeeds Chairman Iwami as per his wishes and becomes the Second Chairman of the Yomei Alliance. It is also revealed that he spared Kasahara; it is speculated by the Hirose Family men that Koshimizu was not the type of man to tolerate being the lapdog of someone like Tsuneo who ordered deaths at their whim. Released from prison, the top members of the Tojo Clan move to form an alliance with the Yomei Alliance now under Koshimizu's control. 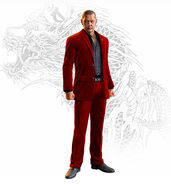