Kaoru Sayama (狭山 薫, Sayama Kaoru) is a supporting character in Yakuza 2/Yakuza Kiwami 2 and Yakuza 3. She is the lead detective of the Osakan police's Division Four.

Sayama wears her black hair pulled back in a messy, low bun (in Yakuza 2), or in a messy updo where her hair sticks out in a ponytail-like style (in Yakuza Kiwami 2). She wears a black pantsuit over a white blouse and wears a silver chain necklace with an amethyst pendant around her neck. In Yakuza Kiwami 2, she has a small beauty mark below her lip.

Initially, Sayama shows hostility towards Kiryu, but over the course of the game, she warms up to him to the point of later developing strong romantic feelings towards him.

She believes that to survive in the police force as a woman, she must build a tough outer shell, and appears to be highly competitive in her field. She appears to be insecure about her Kansai accent, speaking in the more formal Tokyo dialect after she and Kiryu travel to Kamurocho. Her accent returns briefly during her date with Kiryu in Sotenbori.[1] She as well has a bit of a playful side to her that is shown only to people she becomes close with.

She holds the title "Yakuza Huntress" among her peers for the drive she showed in targetting the Organized Crime division since she first joined the force, as well as for her intense pursuit of members of the criminal underworld.

Haruka sees her as a mother figure and as a partner to Kiryu, noting that he acts around her like he usually does around herself. While Haruka is naturally gifted with solving mysteries, she may have been further inspired to be a detective because of Sayama, however briefly that dream may have lasted.

Sayama is the daughter of Jiro Kawara and Shoko Kawara, later raised by the owner of snack bar Aoi, Tamiyo Sayama.

The Florist recounts that Sayama passed her public service exam while still attending tech college at 20 years old, and joined the Osaka Prefectural Police's high tech crime unit under the Foreign Affairs' Division as an engineer under state's recommendation. During her career, she broke a record by getting promoted to assistant inspector in just four years, before receiving a transfer to the prefectural police's fourth division and promoted to lead detective.

In her first appearance, Sayama is seen investigating a man for his inappropriate outburst at a cafe before making his arrest. He becomes agitated and threatens her, however, she holds her ground and carries on with the arrest with satisfaction.

After overhearing Bessho talk on the phone with the Tokyo Police, Sayama is ordered to take Kiryu into protective custody, during which she can follow the Tojo Clan's activities. Despite a rough start, the two end up becoming temporary allies and form an unexpected friendship. However, Sayama's real intention of getting close to Kiryu was to seek answers of her past, particularly what the Tojo Clan had to do with the events of the Jingweon Massacre of 1980 and how her late mother and missing father were involved. Though Kiryu shortly learns about this after overhearing a conversation between her and Tamiyo, he plays along and lets her tag along as he returns to Kamurocho in pursuit of Daigo Dojima, who had been kidnapped by the Omi. Thereafter, she and Kiryu make several trips between Kamurocho and Sotenbori during their investigations into the 1980 Massacre, and they discover a coverup done by the overseeing officer of the case, leading to the possibility of surviving Jingweon members who had gone missing since then.

During the course of the game, she begins to develop romantic feelings towards Kiryu. In the midst of their investigations, she is led to believe she may be a Jingweon survivor, and she and Kiryu have a falling out after she discovers Kiryu's involvement in the massacre - resulting in the death of her presumed father. Eventually their pursuits lead them to discover she is really the child of the Jingweon boss' wife, Seyeon Jung, and Jiro Kawara, also making her Ryuji's half-sister. The couple reconcile, but Sayama takes it on herself to "clean up" the rest of the Jingweon and bring Ryuji into custody. She leaves an emotional final goodbye message to Kiryu and leaves without him, forcing him to give chase.

After defeating the mastermind behind the Jingweon survivor bomb threats, Kiryu and Ryuji begin their final bout even while they're injured. Sayama tries to stop them, but is ignored until both contenders finally collapse from fatigue. With a city-wide bomb threat looming over everyone and not enough time to escape with both men, she shares some final heartfelt moments with them.

At the start of Yakuza 3, Sayama meets Kiryu at the graveyard and tells him that she'll be leaving Japan in order to join a training program for the Metropolitan Police based in America. She suggests that she and Kiryu should follow their own paths for the next few years, but tells Kiryu that she'll be back to Japan one day.

While she plays no further role in the game, completing special tasks will prompt a text message from Sayama to come through on Kiryu's phone.

Checking her character profile at different points throughout the game reveals the following lines:

Sayama's fighting style appears to be based on standard police combat. She has a team heat action with Kiryu, which she lands a punch at an enemy and followed by both landing a high kick at said enemy. While she is shown wielding a gun throughout the game and is a precise shot with it, it is not included in her arsenal during gameplay.

Sayama with Kiryu in Sotenbori 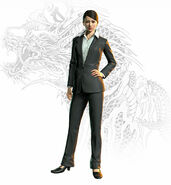 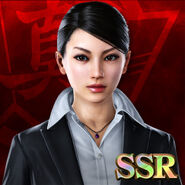 Sayama by the Sotenbori river

Kimono
Add a photo to this gallery
Retrieved from "https://yakuza.fandom.com/wiki/Kaoru_Sayama?oldid=77787"
Community content is available under CC-BY-SA unless otherwise noted.