Ryūsei Nakao
Katsumi Sugai (菅井 克己, Sugai Katsumi) is the secondary antagonist in Yakuza 6. He is the Acting Chairman of the Tojo Clan during the events of the game, as a result of the imprisonments of the Sixth Chairman and his lead subordinates.

Sugai is a cunning and vigilant man, apparently having seen the potential in setting fire to Little Asia to profit from. He also seems to revel in having power over others, likely due to his belief of being overlooked in the Tojo Clan in the past. This is shown when he kidnaps Takumi Someya 's estranged wife, Kiyomi, to force Someya to fight Kiryu to the death in Millenium Tower , and when he (along with Tsuneo Iwami ), forces Kiryu to stay still to allow Sugai to beat him to death with a steel pipe while Iwami's men hold Haruka and Haruto at gunpoint.

Despite being in service since the time of the Tojo Clan's second chairman, Sugai has not made much of a mark. He only serves as advisor to sixth chairman Daigo Dojima in name alone.

6 months before Kiryu's release from prison Sugai committed arson on Little Asia therefore blaming Daigo, Saejima and Majima for it and making them go to prison for that. He later appears watching the fire engulfing Little Asia. He becomes part of a pact between Tsuneo Iwami and the Saio Triad's leader Big Lo that enables the traid to build their base in the remains of Little Asia and spread across Kamurocho. He also consents to a fake war between the Saio Triad and the Tojo Clan to remove Daigo from his position. At the time of Kiryu's release, he becomes the Acting Chairman of the Tojo Clan with Takumi Someya by his side. In the game's finale, he kidnaps Kiyomi and blackmails Someya to kill Kiryu, but when Someya to fails to do so, he stabs himself to protect Kiyomi. Sugai later appears at the Iwami shipyard where he brutally attacks Kiryu with a steel pipe, but is cornered by the Hirose Family. After his defeat, Iwami orders Sugai to kill Haruto and Haruka, but Kiryu saves them by taking the bullet. Having run out of bullets and cornered by Kiryu's allies, Sugai shoots himself with his last bullet, committing suicide. 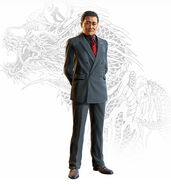