Kazuaki Ino (飯野 和明, Īno Kazuaki) is a character in Yakuza 6. He has an inseparable relationship with the Hirose Family’s Tsuyoshi Nagumo. He has feelings for Kiyomi, but she does not reciprocate.

A native of Jingaicho, Onomichi. He and Tsuyoshi Nagumo, Captain of the Hirose Family, have been stuck with each other for as long as either can remember. They both have feelings for Kiyomi Kasahara, the town's Madonna, making them partners in crime and love rivals all at once, but it does not seem as though Kiyomi herself is interested in either of the pair.

Kiyomi told Kiryu about him, who has an apartment that Kiryu can rent during his stay.

Ino wears a gray hoodie, a pair of 3/4 length shorts, a pair of sandals and a dark green beanie. A life at sea has left him looking withered beyond his years. 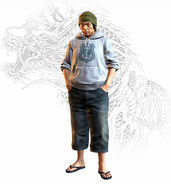 Add a photo to this gallery
Retrieved from "https://yakuza.fandom.com/wiki/Kazuaki_Ino?oldid=75461"
Community content is available under CC-BY-SA unless otherwise noted.