Kazuto Arase (荒瀬 和人 Arase Kazuto) is a hitman who served as a sergeant of the Nishikiyama Family and founded the anti-yakuza group called the Reapers.

Arase had fatally wounded his own oath brother Shinji Tanaka and killed Reina because the latter two conspired against his superior. When Kiryu arrived at the rooftop where he would meet Shinji, he not only saw his sworn brother in a wounded condition, but also Arase gleefully bringing in Reina's corpse. Kiryu then personally confronted Arase, with the gunman bringing Nishikiyama Family grunts with him. However, Kiryu emerged victorious but not before witnessing Shinji die.

Arase was expelled from the Nishikiyama Family for failing to kill Kiryu, and his former comrades treated him with disdain. Because of this, he decided to form the Reapers, a group of hitmen composed of disgraced yakuza with the ultimate goal of taking revenge on Kiryu.

Kiryu later encountered him again a few years since Shinji's death, whereupon the former sergeant of the Nishikiyama Family blamed the Dragon of Dojima for Arase's miserable life. After Kiryu defeated the gunslinger and his second-in-command, Arase disbanded the Reapers and vowed to have another duel with Kiryu.

Arase appears in Kiryu's portion of the game. Kiryu can choose to rescue him, who will decide to team up with the Dragon of Dojima as his partner only for the duration of the zombie outbreak, after which he'll go back to having his duel with Kiryu as he promised two years ago.

In all of the games that he currently appears in, Arase wears a red overcoat (which is given a fuchsia tinge in his Kiwami redesign), a black dress shirt, a pair of black slacks, and black dress shoes. He also wears gold-rimmed, red-tinted eyeglasses.

During his time in the Nishikiyama Family, Arase's ruthlessness and insanity often cause many of his own sworn brothers to keep a sizable distance from him. His failure to kill Kiryu caused him to be looked down upon by his peers, who promptly kicked him out of the Nishikiyama family. By the time he founded the Reapers, he became vengeful towards both his former yakuza family and Kiryu, blaming the latter on the gunslinger's misfortunes. After his defeat and given the chance to repent and rebuild, Arase refused to join the H.O.A and told Kiryu to stay out of his way and that they will fight again.

Arase simultaneously wields two pistols when encountered in battle. Sometimes, he'll shoot a volley of bullets in a single direction from both of his pistols as a special move, which grants him super armor though it leaves him open to be attacked if it is avoided. This attack can only be used when he is in heat mode. He will often fire shots as or immediately after he dodges and run at high speed while low to the ground to create space.

Arase is also very skilled in close combat using his acrobatic skills to create space between him and his opponent by giving an advantage for him to use his guns, often doing backflips and handsprings to dodge Kiryu's physical attacks towards him. These include a back handspring, a side roll, a sideways slide along the ground simultaneous with shots from his pistols that transitions into a side roll to get back on his feet, and a spin while moving to the side followed by a shot from his right pistol. He can also perform a high right roundhouse kick followed by a straight shot from his left pistol. His heat aura is magenta colored and the player is able to perform the Essence of Extreme Beast when he enters his state of rejuvenation.

In both of his boss battles he brings his henchmen with him; in the first game and Kiwami, he has a bunch of Nishikiyama Family soldiers protecting him, while in Yakuza 3, only his second-in-command Shinzaki fights with him.

Arase uses the same back handsprings, side roll, low run to the ground, volley of bullets in a single direction, sideways slide with pistol shots that transitions into a side roll, high right roundhouse kick followed by a straight shot from his left pistol, and a spin followed by a right pistol shot. When attacked, he can perform a knockback-like move in which he glows with a yellow aura and performs a high right hook kick followed by a shot from his left pistol. Another move has him perform a left roundhouse, right roundhouse, left roundhouse, and right axe kick. Another attack has him flashily fire a straight shot from his right pistol, cross his left and right pistol and fire both at the same time four times while moving his arms outwards, take a kneeling position with his arms pointed at his opposite sides and shoot both pistols at once to the side, and fire a straight shot from his left pistol. One other attack he may perform is a flash kick performed simultaneously with shots from his pistols. 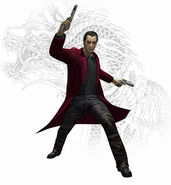 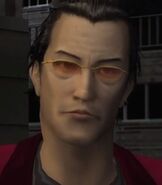