While investigating Seiryo High School along with Sakurai for details of Mikoshiba, Watanabe passes by Takayuki Yagami. The two are formally introduced after they detain Yagami for sneaking into the building where Mikoshiba's body was found. While exchanging details, Yagami notices they are being spied by three individuals and gives chase, catching Yasushi Akaike, who states he is a Kurokawa Academy graduate visiting Isezaki Ijincho for a reunion, the other two caught repeating the reason.

As the arrest of Akihiro Ehara grows more complicated, Kanagawa PD is refrained from looking further into Ehara's case. Watanabe arrives at an apartment complex near Hamakita Park to investigate the murder of Yoko Sawa. He is told by Yagami that the murderer was Kazuki Soma; however, the only camera footage available shows Jin Kuwana, leading Watanabe to realize this is a case plagued by corruption from his superiors.

Watanabe receives a call from Yagami asking for answers on why Kuwana is the one wanted rather than Soma, but he hangs up. Yagami then meets him in Chinatown and he chooses to have Sakurai wait while the two of them go to the docks. There, Watanabe explains the situation and Yagami provokes him into a fight for giving up on justice. After being defeated, Watanabe states his suspicion that Kuwana will be disposed of by Public Security. He receives a call telling him Kuwana was spotted in Ijincho, and asks that Yagami not tell anyone what he heard from him.

In 2022, Watanabe tries to stop police from arresting Yagami and his partners, but he is ignored until Seiryo High students cause a distraction to allow them to get away. Later, he is present when Reiko Kusumoto admits to her crimes and surrenders herself. 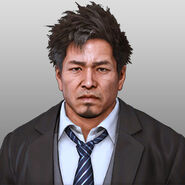