A loan shark in Kineicho, Nagoya, who also happened to be a fan of Shinada during his time as a baseball player.

Takasugi became acquainted to Shinada after obtaining his autograph back in 1997.

Takasugi is a well-dressed man, to a point where Kineicho locals believe that he's involved with the yakuza. He wears a dark gray suit over an off-white shirt, and a pair of modern-looking glasses. 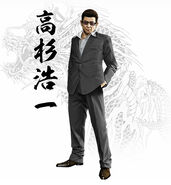 Add a photo to this gallery
Retrieved from "https://yakuza.fandom.com/wiki/Koichi_Takasugi?oldid=76420"
Community content is available under CC-BY-SA unless otherwise noted.