Edit
watch 02:36
Wiki Targeted (Games)
Do you like this video?
Play Sound
MAJIMA CONSTRUCTION IS AT WORK! This article is a stub and is under construction. You can help the Yakuza Wiki by expanding it.

Koichi Waku is a character in Judgment. Suffering from Alzheimer's, he is an inpatient at the Advanced Drug Development Center.

Due to his illness, Waku has aged beyond his years. He is only ever seen in his blue hospital pajamas.

Waku's Alzheimer's has caused him to become aggressive, lashing out at hospital staff.

Waku was admitted to the ADDC's a general ward in 2013, and spent two years there. In the weeks prior to his death, he had an altercation with janitor Shinpei Okubo, accusing him of stealing his wallet, then hitting him. On the morning of his death, Waku's body was taken out of the hospital in a laundry cart, then placed into Okubo's truck. It was found by police three months later buried in a remote mountainous location.

Initially, Okubo was accused of murdering Waku and was put on trial. Takayuki Yagami managed to clear Okubo, proving that while Okubo did discover the body in his laundry truck, and in a panic chose to hide it, he wasn't Waku's killer. However, when Okubo was later framed for the murder of nurse Emi Terasawa, suspicion for Waku's murder again fell on him.

In truth, Waku was murdered by Dr. Yoji Shono. Breaking regulatory protocols, Shono secretly administered a dosage of the experimental Alzheimers treatment AD-9 to Waku. The experiment resulted in Waku's swift and horrific death. Desperate to cover his mistake, Shono hid Waku's body in Okubo's laundry truck, and benefitted from Okubo's own panicked decision to dispose of the body rather than report it to the authorities. 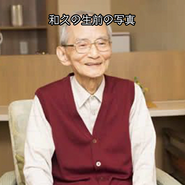 Picture from Judgment's development. The caption translates as "Photograph of Waku alive."