Edit
watch 02:59
Metroid Dread - The Loop
Do you like this video?
Play Sound

Wataru Takagi[1]
Koji Masuzoe (舛添 耕治, Masuzoe Kōji) is a character featured in Yakuza 6. He is the patriarch of the Masuzoe Family, a Yomei Alliance subsidiary.

With his yakuza-like, stern appearance and violent behaviour befitting it, Masuzoe is feared not only by civilians but also by his own men. He keeps a watchful eye over the Hirose Family's movements, an organisation that is indifferent to bringing in cash for him.

Masuzoe wears a purple jacket over black dress shirt, a pair of gray dress pants, and a pair of black shoes.

Masuzoe was born in China as a heihaizi: A child born against the government's one child policy. Since his parents could not afford to pay the fines they would have owed for conceiving him, they instead handed him over to the Saio Triad; a criminal syndicate that smuggled heihaizi to Japan and forged identity papers for them to pass them off as Japanese citizens and then raised them to become their agents in said country.

Masuzoe was thus raised by Saio members to aid their business in Japan by joining their partners in the heihaizi trafficking business, the Yomei Alliance, and serving as a mole within the organization. Masuzoe gradually rose through the ranks and became the patriarch of his own family.

Eventually, Masuzoe was also given the task of looking after Yuta Usami, the second son of Saio ringleader Big Lo, who had also passed off as a Japanese citizen and sent to an orphanage in Hiroshima. Yuta was to serve as a "back up" heir to the Saio Triad, in case Big Lo's first-born son, Jimmy Lo, were killed before he could inherit the triad. Accordingly, Masuzoe and another, younger Saio heihaizi named Tatsukawa were instructed to ensure Yuta was prepared to take up the role of Saio ringleader if it were ever necessary. To that end, Tatsukawa befriended Yuta and eventually persuaded him to join the Yomei Alliance, so that he'd already be used to leading a life of crime. Masuzoe also ensured Yuta learned to speak Chinese by getting a Chinese hostess in his employ to flirt with Yuta and convince him to take up the language to impress her.

In 2016, Masuzoe and Tatsukawa learned that Yuta had unknowingly fathered a son with Haruka Sawamura. Since the conception of a half-Japanese child by a Saio heir was against the triad's code of blood law, the two heihaizi infiltrators tried to pressure Haruka into aborting. Since Haruka wanted to keep the baby, she turned to her friend and Yuta's boss, Patriarch Toru Hirose, and asked for his help in leaving Hiroshima undetected. Tatsukawa's attempts to capture Haruka later on would lead to him accidentally running her over with his car and leaving her in a coma.

Kazuma Kiryu would later travel to Hiroshima in search for the father of Haruka's baby, Haruto. While there, he would come into conflict with Masuzoe. The two first met when Patriarch Masuzoe tried to force Kiryu's rival, Tsuyoshi Nagumo, to extort protection money from Kiyomi Kasahara's bar. Since Nagumo was in love with Kiyomi, he refused and Masuzoe proceeded to forcibly take him away for punishment with several of his goons. Kiryu witnessed this and rushed to Nagumo's aid. The former yakuza would confront Masuzoe and his men atop the Mount Senkoji Shrine, resulting in a brawl, which Masuzoe and his men lost.

Humiliated, Masuzoe would seek out revenge on Kiryu and Nagumo's organization, the Hirose Family. After Nagumo's lieutenant, Takaaki Matsunaga, got into a brawl with some employees of Yomei Chairman Heizo Iwami's company, Iwami Shipbuilding, the Yomei headquarters decided to punish him and Nagumo. Masuzoe accompanied Yomei Captain Kanji Koshimizu when he went to deliver the sanction, hoping to help in its execution and, if possible, to also get another chance to fight Kiryu. Masuzoe's wish was granted, as Kiryu intervened to prevent his new friends from being punished; giving the Yomei patriarch an excuse to attack him again. Despite having more men than before to help him out, Kiryu managed to beat him once more and, adding insult to injury, he convinced Captain Koshimizu to spare Matsunaga and Nagumo from punishment. Masuzoe briefly appears again at the hotel at the top of the hill where he spots Nagumo after he takes his mask off. He begins to run off to tell his allies, only to be restrained by Nagumo while Kiryu chases after Someya.

Masuzoe would run into Kiryu once again when Kiryu raided the Saio Triad's Kamurocho headquarters with Nagumo, Yuta Usami and Shun Akiyama. There, Masuzoe interrupted Kiryu's fight with fellow Saio officer Ed, revealing his true affiliation to the invaders. Kiryu was only spared being shot by Masuzoe and his men due to the arrival of Big Lo, who decided to let him go because he had further use for him.

Soon after, Masuzoe would learn that Tatsukawa had been murdered by the Saio because he had betrayed them and joined forces with Tsuneo Iwami. Horrified at how brutal Ed was in dispatching Tatsukawa, he decided to betray the Saio as well by revealing the truth about Yuta's parentage to him and the Hirose Family in exchange for the Yomei Alliance's protection. However, after Masuzoe had revealed everything he knew, Hirose patriarch Toru Hirose proceeded to murder him instead, since Masuzoe knew about the existence of the secret of Onomichi, which Hirose's boss Heizo Iwami was desperate to protect.

He fights with what appears to be a form of tai chi. He's always accompanied by a number of goons who aid him in battle. 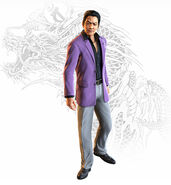