In Yakuza and Yakuza Kiwami, Shindo has a slicked-back hazel hair and wears a pale gray suit over white shirt, with matching pale gray dress pants and black dress shoes. In Yakuza 2 and Yakuza Kiwami 2, his attire is slightly altered: his suit and shirt color combination is now white/black, similar to his former patriarch's attire, and his haircut is changed into a classic slicked-back undercut.

Shindo's blind ambition took the most out of him, to a point where he's willing to sell the Tojo Clan out to Omi Alliance's Sengoku Family, in an effort to become the clan's next chairman. Despite this, the first game (and its remake) shows that Shindo once held a degree of respect for Kiryu, calling him by his former position as a Lieutenant of the Dojima Family.

Shindo serves as the captain of the Nishikiyama Family. He is first seen when Akira Nishikiyama shoots two of his own men dead for killing someone who appeared to be Mizuki Sawamura. Later he is seen again with Nishikiyama planning the ambush of Kazuma Kiryu at Serena. He then fights Kiryu at the Serena Backlot with a katana, and is defeated.

Learning about Nishikiyama's death, Shindo disobeys the acting Tojo Clan chairwoman Yayoi Dojima's orders to aid Kiryu against the Go-Ryu Clan and the Jingweon Mafia. He also wanted to sell the Tojo Clan to the Sengoku Family, to be the next chairman after Yukio Terada's supposed death and marry Yayoi, even sexually assaulting her on several occasions.

After Shindo's ambitions and betrayal come to light, Kiryu fights him in a brawl in the Tojo Clan headquarters. After being supposedly defeated, he tries to sneak-attack Kiryu from behind in the meeting room, but is soundly beaten after a second fight. When Yayoi expels him from the Tojo Clan, Shindo reaches for a gun, but Daigo Dojima outdraws him, shooting him dead.

Shindo is skilled in using a katana, relying on speed and technique to quickly cut down his foes. 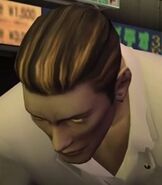 Shindo bowing to Akira Nishikiyama and talks about the Kazuma Kiryu's ambush. 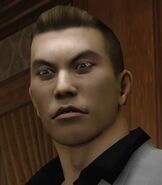