Leader of the MIA

I will join forces with the Omi Alliance and rise to the top of Japan. The Omi will unify the criminal underworld, and all of that power will be mine. Then I can realize my ambitions!
— Kyohei Jingu

Kyohei Jingu (神宫 京平, Jingū Kyōhei) is the secondary antagonist of Yakuza/Yakuza Kiwami. He is a politician who leads the MIA, an intelligence agency that works under direct ministerial order.

Jingu has a large mole on his forehead.

Jingu is always shown in a black business suit and black slacks.

Jingu is a man who is driven by ambition and greed, to the point that he is willing to sacrifice his own family.

He and Yumi met after she lost her memory, following the murder of Sohei Dojima, and the two conceived Haruka. Jingu left Yumi and Haruka when he received a marriage proposal from the Prime Minister's daughter, desperate for power and riches.

He ordered the death of a reporter who was threatening to reveal the truth about Yumi and Haruka. He then requested Sera, then Tojo Clan chairman, to hire an assassin to kill Yumi and Haruka. Before the assassin could kill them, Shintaro Kazama arrived and shot the assassin. As a result of this incident, Yumi regained her memory.

When Kiryu and Haruka go to Ares to meet Yumi, Jingu and his men are waiting for them. He then shoots Haruka, but Kiryu takes the bullet, shocked that Haruka's own father would shoot her. Jingu explains that Yumi and Haruka are nothing more than a problem for him. Then, Yukio Terada, the lieutenant of the Omi Alliance, arrives and holds Jingu at gunpoint. Jingu laughs and, as the Omi soldiers grab Terada and reveals the Omi Alliance work for him. Makoto Date appears in a helicopter and orders Jingu's arrest. Jingu's men shoot at Date's helicopter and order every witnesses to be killed. After Kiryu defeats Jingu, Yumi revealed the safe containing the money. Jingu shoots Kiryu twice, but Yumi takes the second (and fatal) bullet. Nishikiyama then charges Jingu with a knife and stabs him, before setting off the bomb.

It was revealed that sometime before the events of the first game, Jingu was responsible for Akiyama's dismissal from the bank, as the 1,000,000 yen that was deposited to Akiyama's account was part of his money laundering scheme. 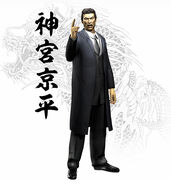 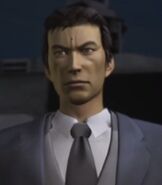 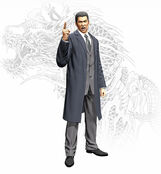 Sera helps Jingu to dispose of a corpse.

Add a photo to this gallery
Retrieved from "https://yakuza.fandom.com/wiki/Kyohei_Jingu?oldid=77260"
Community content is available under CC-BY-SA unless otherwise noted.