Kyoya Sadamoto (貞元 響也, Sadamoto Kyōya) is the main antagonist of the Lost Judgment expansion The Kaito Files. He is the husband of Mikiko Sadamoto, and father of Jun Sadamoto. He is the CEO of Image Interactive, and the shadow consultant of Rhizome (and in turn, influential to its gang wing, Crimson Lotus).

Sadamoto has a lean build and medium-length hair.

He wears a jet black suit jacket with tosca pocket square over a white dress shirt, a matching pair of dress pants, and a pair of blue loafers.

Sadamoto on the surface presents himself as a charismatic man and skilled businessman to everyone around him. Seen as a guru of business advice, this personality is nothing more than an affable mask for his true nature as a sociopath. Beneath lies a man who revels in his cruelty and treachery towards others, and holds no emotional bonds save for those he exploits along the way. He constantly lies about his dealings to others and sees sentimentality and empathy as weaknesses that prevent others from succeeding and will not hesitate to gloat if confronted.

Sadamoto was among countless elite students at a college that Shusuke Kenmochi was a part of. Bringing with him knowledge about business administration, he turned Kenmochi's social group, Rhizome, into a booming business, serving as an advisor and soon gained the group's support. Using Rhizome to deal with grey crimes while he had already founded his own business, the college group would serve as the foundation of Crimson Lotus. Sadamoto later founded Devenir as a dummy company to fund Crimson Lotus, and he would use Crimson Lotus to deal with his enemies, contributing to his business's success.

Eventually, the business fell into dire straits around 2007. He learns from Kenmochi of a lucrative land deal that is being held up by the very wealthy Natsume family, worth tens of billions in assets. Sadamoto also learns of the Natsumes' older daughter dating a yakuza, and younger daughter having a stalker. This caused him to concoct a risk plan. Once he met up with Mikiko, he supported her marriage and made suggestions to become friendly with the Natsumes. After Kaito chooses the yakuza over Mikiko, as Sadamoto had planned, he married her.

On Maho Natsume's birthday, Sadamoto sent her and her family wine laced with sedatives. While having dinner with Mikiko, he asked is the wine tasted good out of concern for the sedatives changing the taste. He later used Kenmochi to burn down the property, although he never informed Kenmochi of the family still sleeping inside, and used Maho's stalker as an alibi for him to not take the fall. With the Natsumes dead except for Mikiko, Sadamoto inherited the vast fortune they left behind after marrying her. He would still attend all of Rhizome's yearly reunions.

This would help him become a wealthy businessman, as he would become CEO at Image Interactive. After Jun was born, Sadamoto was neglectful towards him, on one occasion not noticing Jun had been away for a week. One day, when Jun was a child, he played with Sadamoto's knives against his warning. In order to make him easier to restrain, Sadamoto lightly cut Jun with a knife, causing him to develop a fear of knives.

In 2020, he comes home drunk one day and left his computer open while passed out. This caused Mikiko to learn Sadamoto's true nature. When Sadamoto woke up, he overpowered her in a fight after learning what she knew, then had Crimson Lotus assassinate her.

Eventually, rumors of Mikiko being sighted around Kamurocho make their way to Sadamoto. He started cutting off all contact with any members of Crimson Lotus, doing everything he can to erase all evidence of their cooperation, even killing the founding members. This was also to ensure his reputation remained intact. He searched for Mikiko to pin the blame of the Crimson Lotus founder killings on her.

During his hunt for his former colleagues, Sadamoto turns to Mikiko's old flame ex-yakuza Masaharu Kaito to find her, though Kaito turns him down even after being offered generous compensation. Later, Sadamoto kills another founder, Ashizaki, and burns down his security company to destroy evidence of illegal wire transfers from his dummy company. He kills another founder the next morning. He also arranges for a news report of Crimson Lotus being responsible for the Natsume arson to be aired after the yearly Rhizome reunion.

On the day of the reunion, Sadamoto states he canceled his attendance due to needing to attend a meeting, but a select few are told he is to make a surprise appearance. To kill the remaining founders, he prepares slow-acting poison in the hotel's kitchen and leaves Mikiko's biological signature there to incriminate her should the need arise. He then poisons the drinks of the attendees who were Crimson Lotus founders. He also orders Kenmochi to take Jun hostage.

When the party commences, he heads to the roof for a cigarette when Mikiko finds him and points a gun at him. Kenmochi arrives with Jun, and Sadamoto holds the boy at knifepoint before telling Mikiko she can either let Jun die, or kill Kaito and be imprisoned with help from the evidence he planted. The poison then begins to take effect, killing the Crimson Lotus founders.

Jun, however, overcomes his fear of knives, forcing Sadamoto to fight Kaito. He is able to nick Kaito with a poisoned knife. Though Sadamoto loses the fight, Kaito feels the poison's effects, and Mikiko plans to kill Sadamoto, but is discouraged by Jun and Kaito. Sadamoto is not safe, however, as Kenmochi is able to fight off the poison just long enough to strangle the now-defenseless Sadamoto, and he is killed via neck snap.

Sadamoto is a surprisingly agile and skilled fighter. Unlike Soma who has a defensive stance with his knife, Sadamoto has a carefree and relaxed stance. Most of his attacks consist of knife slashes alongside basic punches and kicks. His aura is purple. 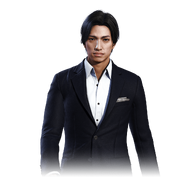 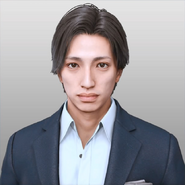