This is a Chinese name; the family name is Lau/Chau.

Lau Ka Long (劉家龍, Làuh Gā-lùhng/ラウ・カーロン, Rau Kāron), also known as Chau Ka Long (周家龍, Jāu Gā-lùhng/チャウ・カーロン, Chau Kāron), is the head of the Japanese branch of the Chinese Snake Flower Triad. He is a supporting antagonist in both Yakuza/Yakuza Kiwami, and Yakuza 3. In Yakuza: Like a Dragon, he becomes an underground arms dealer that can later be called upon as a Poundmate.

Prior to 2019, Lau wears a tailor-made suit with ornate details over a purple mandarin collar shirt, white suit pants and matching white dress shoes. His weapon of choice is an ornate spear. He has long hair which is done into a ponytail and has a large scar on his face. By 2019, his hair is let down and he wears black jeans and a black leather jacket over a grey shirt. He also sports some shades.

Lau bears a strong grudge against the Tojo Clan, particularly against Shintaro Kazama and Kazuma Kiryu. He also tends to look down at the Japanese.

Since becoming an arms dealer providing illegal weapons under the name Chau Ka Long, Lau always puts his clients to the test to see if they can be trusted. After Kasuga proves himself and becomes confident, he becomes willing to help him in battle, not wishing to lose a valuable customer.

Lau established the Snake Flower Triad's presence in Japan by taking over Yokohama's underworld during the 1980s due to its large Chinese population. As well as extorting local businesses for protection money, the gang also specialized in forging passports and travel documents for illegal immigrants. Lau established the Triad's headquarters in a large Chinese restaurant in the city.

Lau was a pupil of Granny White, a White Lotus school martial arts master, who kicked him and the rest of the Snake Flower Triad out of her dojo after Lau asked to be her successor.

In 1993, Kazuma Kiryu fell foul of the Snake Flower Triad after Lau found out that his Kazama Family were trying to muscle in on his passport forgery business. This resulted in him being tortured by the triad, until his patriarch Shintaro Kazama rescued him.

In 2005, Kiryu once again goes over to the Snake Flower headquarters in a Yokohama Chinese restaurant after finding out that they had kidnapped Haruka Sawamura through Bloody Eye in a conspiracy with Yukio Terada and Futoshi Shimano (Lau is revealed in the game to have asked for a sizable cut of Kyohei Jingu's ten billion yen from Shimano).

When Kiryu arrives in Lau's chamber, he reveals that he sold to key to Jingu's money, Haruka's pendant, to Akira Nishikiyama. He also states that Haruka has more value than the pendant that none of the yakuza seem to have realized, which is later revealed to be her connection to Jingu. Kiryu defeats Lau, but is swiftly arrested by Junichi Sudo, who arrives with a cohort of police officers.

In the years leading up to 2009, the Snake Flower Triad form an association with Goh Hamazaki's Hamazaki Family to control Yokohama. In return, Hamazaki offers the Triad control of the proposed Okinawa resort.

Later, the Snake Flower Triad kidnaps Rikiya Shimabukuro. Coming to Rikiya's rescue, Kiryu once again confronts Lau, who says the primary reason he teamed up with Hamazaki was to exact his revenge on Kiryu for humiliating him four years earlier. After Kiryu defeats Lau, his officers are about to execute Rikiya when they are both shot dead by the man Kiryu recognizes as the man who looks like Shintaro Kazama. The man then shoots Lau in the head before running off. The supposed death of Lau spells the end of the Snake Flower Triad's operations in Japan until 2016.

Lau is mentioned during a substory through a holdout member of the Snake Flower Triad terrorizing Kamurocho with a small bomb attack.

Lau is revealed to have somehow survived being shot in the head and has since been working as an underground weapons dealer in Ijincho under the name Chau Ka Long. Lau can only appear once the gambling hall is unlocked. Once it is, Iroha Yanagi will let Ichiban Kasuga know of the underground dealer and the password required to reach him. Kasuga gets to Zhou Long Distribution and is ambushed after providing the password. Lau then appears and asks to meet Kasuga near Kinka Bridge, having passed his test. When they meet again, Lau asks Kasuga if he was part of a yakuza family, to which the latter replies that he was part of the Arakawa Family of the Tojo Clan before. Lau muses about how Shintaro Kazama and Kazuma Kiryu were also in the Tojo Clan, and when asked if they were friends, Lau replies that he'd rather not be seen by the Tojo again, implying he didn't know about the Tojo clan being severely weakened and driven out prior to the game's events. After explaining the reasoning for his subordinates fighting him, Lau offers his services to Kasuga, under the condition that he never mentions this to anyone. Once Kasuga builds his confidence up, Lau decides to assist him in battle as a Poundmate, as losing him would be bad for business.

Lau is also directly referenced during a Drink Links conversation between Kasuga and Tianyou Zhao as the former leader of the Japanese Snake Flower Triad, of which the Yokohama Liumang that Zhao led is a splinter group. According to Zhao, the Snake Flower once controlled Ijincho's Chinatown district, but that control was weakened heavily after Lau's supposed death.

Lau is a practitioner of the White Lotus style of spear-fighting, of which he was taught by master Granny White. He is also skilled in the use of Chinese sabers and claws. 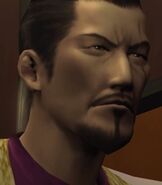 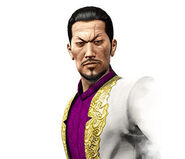 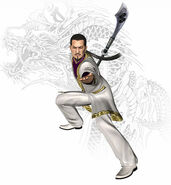