It was released worldwide on the PlayStation 4, the PlayStation 5, the Xbox One, and the Xbox Series X and Series S on September 24, 2021, with owners of the Digital Deluxe or Digital Ultimate editions being granted access on September 21, 2021. As the second installment of the Judgment series, it has been developed by Ryu Ga Gotoku Studio as a direct sequel to Judgment.

Lost Judgment is a continuation of the events of Judgment, its events beginning December 2021. The game features an open world set in the universe established by the Yakuza series. It primarily focuses on the red-light district of Kamurocho, Tokyo, a fictionalized version of Kabukicho, Tokyo, and the port district of Isezaki Ijincho, Yokohama, a fictionalized version of Isezakicho, Yokohama. Seiryo High School, a private high school in Ijincho modeled after a real-life high school, serves as one of the central locations.

The rotting corpse found in an abandoned building in Ijincho was that of 22-year-old Hiro Mikoshiba, a student teacher at the high school Yagami is investigating...

Hiro Mikoshiba, former bully, was found murdered in what was clearly a pre-planned and brutal manner. While Yagami searches for a lead in this troubling case, a violent group steps out from the shadows to block his path...

Yagami continues his investigation into a policeman groping a woman in public and a former bully being murdered—both of which occurred on the same day...

The assailant and the victim in the train groping were presumed to have no connection to one another, but once Yagami and the crew work through the evidence at hand, they reach a potential alternative. Through careful planning, Ehara may have intentionally tarnished his own name to create an alibi for murder...

Four years prior to Toshiro Ehara's murder, a similar tragedy occurred at Kurokawa Academy in Tokyo, also stemming from bullying. When Yagami visits Sawa-sensei's home during his investigation, he encounters Kuwana, Ijincho's handyman...

Sawa-sensei's death was a sudden blow to Yagami. Soma, the head of a gang of thugs going by RK, points the finger of blame at Kuwana...

RK is hunting for Kuwana, and will not hesitate to kill anyone who gets in their way. Yagami looks further into Kuwana's true identity to try and find the link between the two individuals...

Kuwana has blackmailed his former students into working with him to kill bullies across the nation—but now, Sawa-sensei's death seems to imply that even Kuwana no longer has control of the situation...

Not only is RK after Kuwana, but Public Security, Japan's largest intelligence agency, is looking for him as well. However, their ultimate target seems to be Reiko Kusumoto, Vice Minister of the Health Ministry...

Preparing for Akihiro Ehara's appeal, Yagami and crew begin constructing their strategy. To have any hope against Bando, Public Security's coordinator, they've devised a plan to capture RK's leader, Soma...

If Soma truly is an undercover Public Security agent, then capturing him ought to drag the mastermind of the scheme into the light. Unfortunately, Kuwana slips away yet again, further complicating matters...

Final Chapter: Darkest Before the Dawn[]

The law fails to provide justice to those who are ignored by the system. It also fails to punish those who get away with their crimes. What can be done to fix this? Yagami and Kuwana continue to seek their own answers...

Lost Judgment uses many of the same gameplay mechanics as the previous game, Judgment, including most of the combat, Tailing, Chasing, investigation modes, and the use of drones and extracts. New to Lost Judgment is a third style for Takayuki Yagami, Snake, which focuses more on grabbing, parrying, and disarming opponents, much like the real-life Aikido style. EX Boost has been made slightly weaker when starting out, no longer absorbing damage or making him less likely to flinch, though upgrades allow it to eventually surpass its previous counterpart. Deadly Attacks are still performed by bosses, but Mortal Wounds and Medical Kits are no longer in the game; thus these attacks simply do more damage than normal. Mortal Reversals can be performed by dodging at the right time and pressing Circle quickly to counter Deadly Attacks. There are more defined status ailments, such as bleed, which makes Yagami lose health over time and more for each "strenuous action" (i.e. Finishing Blows or EX Attacks) he takes, agony which prevents dodging, and blind which prevents locking on. SP gain is vastly increased, affording players more skills to upgrade Yagami with, and the tree is expanded to fit skills for each individual style, his stats, and general exploration. Adding to the new modes is Parkour and Stealth; Parkour has Yagami climb various obstacles (usually buildings) to get access to certain places. Stealth has Yagami sneak around in an area while using coins or smoke bombs as distractions.

Exploration takes some improvements made in Yakuza: Like a Dragon, such as being able to call a taxi anywhere with the Taxi app. Yagami will gain a skateboard that can be used on roads for faster speeds than running. He will also gain a companion dog that will help him find extra Side Cases. The item menu has expanded to include equipment that Yagami can wear to increase his stats; however he can only set one shortcut item by default.

On March 10, 2021, SEGA applied for a trademark for "LOST JUDGMENT," which is believed to have first been reported by Gematsu[1] on March 22, 2021. The newly filed trademark lead to speculation regarding the possibility of a sequel to Judgment due to the similarity between the titles. This speculation is believed to have been rooted in Ryu Ga Gotoku Studio's previous comments expressing interest in developing one after Judgment became a success overseas, as well as the studio's previous interest in developing a game that would receive a simultaneous release both domestically and internationally.

Speculation was further fueled when, on April 23, 2021, the day of Judgment Remastered's release, two of the studio's official social media accounts, @RGGStudio and its Japanese Judgment-only counterpart @judge-sega jointly announced a giveaway campaign alongside a mysterious countdown to May 7, 2021, dubbed Judgment Day. For the duration of the campaign, the accounts tweeted automated responses to all entrants which would come with short video clips attached, typically less than ten seconds long.

While the majority of these clips depicted footage from Judgment Remastered and ended on a black screen with a scene number, some clips previewed footage from what was later revealed as the trailer to Lost Judgment, ending on a white screen with the scene number censored. The accounts would alternate posting new clips up until the final days of the campaign, at which point both accounts began consistently attaching the same clip to their responses.

On Judgment Day, an application titled ロストジャッジメント：LOST JUDGMENT：裁かれざる記憶 could be seen on the PlayStation Store advertising a September 21, 2021 release date, but this was was soon taken down. Starting at 23:00 (or 11:00 PM) Japan Standard Time, an English-language livestream and a Japanese-language livestream ran concurrently, broadcasting the official announcement of the game as well as the full story trailers. The game would be released globally on both current and next-generation home consoles on the same date, September 24, 2021, a first for the studio.

Later in the day, the game was confirmed to include dual English and Japanese audio, dual English subtitles for both, and French, Italian, German, and Spanish subtitles based on the Japanese audio. In Japan, the Xbox One and Xbox Series X and Series S versions are digital-only releases, whereas the PlayStation 4 and PlayStation 5 versions will receive both a physical and a digital release. The worldwide release will be available in both formats on all aforementioned platforms.

An expansion to Lost Judgment, titled The Kaito Files (海藤正治の事件簿, Kaitō Masaharu no Jikenbo), released on March 28th, 2022. It features Masaharu Kaito as its lead protagonist and does not require progression in the main game to be played. There are no side cases and minigames are limited. Additionally, there is no Premium Adventure or New Game Plus after completing the main story. Legend difficulty is available without needing a cleared game.

The Kaito Files takes place in early 2022, after the events of Lost Judgment. The setting where the story mainly takes place is Kamurocho. Other locations include Shirakaba Clinic in rural ChibaWP, and Hotel Grande Blu Marino in Isezaki Ijincho.

The story follows Kaito as he searches for Mikiko Sadamoto alongside Jun Sadamoto, who claims to be their son.

Chapter 1: What Goes Around[]

Mikiko Sadamoto, formerly Mikiko Natsume. According to her husband, Kyoya Sadamoto, Mikiko was thought to have committed suicide, but she was recently spotted in Kamurocho. Kaito declines Sadamoto's request to look for Mikiko only to be confronted by Mikiko's son, Jun Sadamoto. Jun claims to be Kaito's son and asks him to find his mom.

Kaito manages to fight off the Bato goons trying to kidnap Jun and picks up a lead on Mikiko's whereabouts. About a year and a half ago, a man claiming to be a doctor went around with a photo oh Mikiko asking if anyone knew her. The man's name: Yasutaka Shirakaba. With a sliver of hope, Kaito and Jun head to Shirakaba's home and clinic in Chiba.

At last, Kaito and Jun reunite with Mikiko. However, they learn Mikiko's planning her revenge on Crimson Lotus, the group responsible for the deaths of her parents and sister. Kaito succeeds in rescuing the captive Mikiko from Kenmochi.

Consumed by a burning hatred, Mikiko tries to kill Kyoya Sadamoto. However, Kaito manages to get through to her, and she calls off her plans. She realizes killing Kyoya would mean abandoning Jun, who means the world to her. 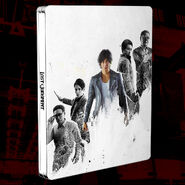 The logo for Lost Judgment in white and in black.