Cherami Leigh
Mafuyu Fujii (藤井 真冬, Fujii Mafuyu) is a character featured in Judgment and Lost Judgment. She is a public prosecutor and a close friend of Saori Shirosaki and Takayuki Yagami.

Mafuyu has shoulder-length hair that is split on either side, brown eyes and a slim build. She wears a pinstriped off-white blazer with the Public Prosecutor pin on her blazer's lapel over black shirt with matching knee-length skirt, along with a pair of black shoes. She also wears a gold necklace on her neck and is always seen with a brown leather bag at her left shoulder.

Mafuyu appears to be an overall good person, being on good terms with all of the main characters in the game. As a prosecutor, she's passionate about her job and is fiercely idealistic. She seems to still hold feelings for Yagami, always greeting him warmly and expressing happiness in him being always there for her no matter what.

Early on her life, she lost her parents after they were killed in a hit-and-run incident.

Mafuyu's career as a prosecutor was influenced by Kunihiko Morita, whom she had fallen in love with while he worked to solve her parents' untimely deaths.

She's a long time friend of Saori Shirosaki, a defense attorney working at Genda Law Office. They had drifted apart, but reunited when the two of them attended the same university to study law. At some point during her life, Mafuyu dated Takayuki Yagami, but the two broke up when Yagami resigned from his job as a defense attorney. Despite that, Mafuyu still keeps tabs on Yagami and the two appear to be on amicable terms.

After the video of Hiro Mikoshiba's video goes viral, Mafuyu informs Yagami, Kaito, Saori, Hoshino, and Genda that it has caused chaos for the prosecutors and they are firm in their stance that the video was falsified. The stance is reinforced by Sadao Takano not wanting to overturn Akihiro Ehara's guilty verdict, causing her to suspect Ehara had misdirected the court to issue a guilty verdict of sexual assault.

Outside the RK headquarters, Mafuyu arrives to check on Saori and the others after two men dressed in police uniforms opened fire. She calls officers to guard Genda Law Office in case RK attacks the location.

In 2022, she enters Hidemi Bando's office with Takano to arrest him for his involvement with RK. 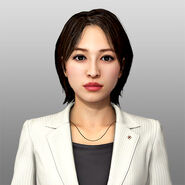 Mafuyu and Saori during Justice is Sweet