The Majima Family (真島組, Majima-gumi) is a subsidiary family of the Tojo Clan. It is the largest faction in the Tojo Clan, made up of several thousand men.

The formation of the Majima Family was officiated at some point between 1988 and 1995. Goro Majima decided to disband the family in December 2006 due to disagreements between him and the then-chairman of Tojo Clan, Yukio Terada. However, in 2007, Kazuma Kiryu persuaded Majima to return to Tojo Clan.

In its later years, the family is shown to be a considerable force, partly due to Majima's unpredictable attitude. 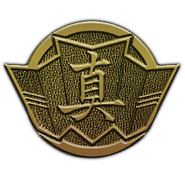 Majima Family badge in Yakuza 6
Add a photo to this gallery
Retrieved from "https://yakuza.fandom.com/wiki/Majima_Family?oldid=68498"
Community content is available under CC-BY-SA unless otherwise noted.