River Kanoff
Makoto Tsukumo (九十九 誠一, Tsukumo Makoto) is a character in Judgment and Lost Judgment. He is the director of Yokohama 99, a detective agency.

Tsukumo has an unkempt appearance, with long hair tied into a ponytail and a noticeable amount of facial hair.

Tsukumo wears a buttoned monochrome plaid shirt with a black blazer on top, complemented by grey pants with a matching silver-buckle black leather belt and black socks. He also wears high-tech spectacles and a black headset which is hung around his neck when not in use. After he moves to Yokohama, he starts wearing a pair of black shoes.

Hehe, what can I say? I must be sitting on the F5 key, because my ass is refreshing.

Tsukumo has a lighthearted personality and is quite nice and playful. He is very respectful towards those he admires, and refers to some people (notably Yagami) with the very formal 氏 (-shi), an honorific normally used in contexts where the speaker knows of - but is not personally acquainted with - the person in question, such as newsletters and legal documents.

Tsukumo sometimes demonstrates stereotypical otaku characteristics such as a love for rare and limited edition anime figures. He is not antisocial, but is rather reclusive, spending most of his time at his house, inside Yokohama 99, or in internet cafes. After becoming the director of Yokohama 99, he is seen leaving his base of operations more often.

He has a seething disdain of scalpers and the reselling industry in general after having to buy a product at three times its original price.

Tsukumo very rarely left his house, but Takayuki Yagami convinced him to go out more, even if only slightly. Tsukumo moved into the internet café Mantai as the rent was cheap and the internet connection was strong, and made it his base of operations.

Tsukumo helps Yagami track down Aragaki using the Chatter app, and asks him to buy a rare figurine from Ebisu Pawn in return. Yagami contacts Tsukumo whenever he needs to narrow down a location for someone he needs to find, and when he needs to find special sweets for Saori. He also builds wiretaps that Yagami uses to bug the Matsugane Family office.

Tsukumo detects an odd frequency which helps Yagami track down a serial bomber. He uses his tech skills to defuse a suicide bomb the bomber was carrying as a last resort, allowing him to be arrested.

Six months after the failure of AD-9 is exposed, he and Fumiya Sugiura open their own detective agency after Tsukumo is inspired by Yagami's heroics. They receive Jin Kuwana's approval for operating in Isezaki Ijincho.

MAJIMA CONSTRUCTION IS AT WORK! This section is under construction.
SPOILER WARNING: Plot details for Lost Judgment follow. (Skip)

Yokohama 99 receives various requests related to middle school and high school bullying. To address this, Tsukumo does comprehensive research on bullying, and calls Yagami and Kaito to Isezaki Ijincho for assistance. He gives the team hidden cameras for surveillance and hidden speakers for Yagami after bullying is discovered. When Mami Koda is bullied, three project their voices through the speakers to give the appearance that the other students are speaking, causing the students to properly defend Koda. He later provides Yagami with his gadgets.

Yagami is given a case where he has to investigate the killing of Hiro Mikoshiba. Tsukumo helps him by looking online for any details regarding Mikoshiba or Toshiro Ehara, who Mikoshiba had bullied to suicide, as his father Akihiro Ehara claims to be Mikoshiba's murderer even with a solid alibi against it. During one discussion, rocks are thrown into Yokohama 99 by masked assailants, causing Yagami, Kaito, and Kuwana to give chase. This causes a different groups of masked assailant to attack the office, knocking out Sugiura and breaking Tsukumo's pinky finger.

Kaito calls Tsukumo, asking him if he wants to go for drinks, but Tsukumo declines to attend the live premier of a new anime movie. Later, Kaito asks for Tsukumo's help in decrypting a burnt hard drive for information related to Mikiko and Jun Sadamoto. Tsukumo has a motorcycle courier pick up the hard drive, then learns of a dummy cell company set up for the purpose of conducting illegal wire fund transfers; info which he passes to Kaito. 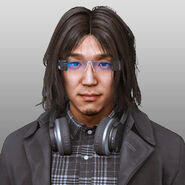 Tsukumo as he appears in the opening credits for Lost Judgment, alongside his partner, Sugiura.