Peter JessopWP
Masao Igarashi (五十嵐 昌夫, Igarashi Masao) is a character featured in the Lost Judgment add-on, The Kaito Files. He is the chief consultant of the Bato Detective Agency, and former captain of the Bato Family.

Igarashi is a middle aged man with a tall build. He has black hair in a slicked back hairstyle.

Igarashi was the captain of the Tojo Clan's Bato Family, and it was under his suggestion that the family focused on R&D. After the clan's dissolution in 2019, he helped the Family transition into legal work by using their R&D skills as a detective agency. Their work still employed shady tactics used by yakuza, which included extorting clients. One day, Igarashi received an anonymous request to keep Jun Sadamoto safe even if it involved kidnapping, and a request to investigate Kyoya Sadamoto.

Masaharu Kaito enters the Bato office with Shiro Senda, informing him that Senda gave him evidence to bust the agency for illegal practices. In an attempt to eliminate detective work competition, Igarashi has his subordinates attack Kaito, but they fail, and Igarashi hands over a former client's extorted money as well as a fee for Kaito in exchange for Senda's blackmail recording. Shortly after, he has the agency move offices.

At an unknown point in time, Igarashi's investigation into his agency's mysterious client bears fruit as he learns they were contracted by Jun's supposedly dead mother, Mikiko Sadamoto. This, and the fact that Mikiko was planning to murder Crimson Lotus members, excites Igarashi, and he and his men fully commit to Mikiko's request. Along the way, Igarashi also learns of the tragedies Sadamoto caused for Mikiko to inherit her adoptive parents' fortune.

To take Jun, who is now with Kaito, Igarashi has Senda and other subordinates keep Kaito occupied while he takes Jun. They then take Jun to their new offices, but Kaito is later able to take back Jun. Much later, Igarashi takes Kaito with him to explain that Mikiko had hired them, and once affirming Kaito's resolve to save her, allows him to come with them to Ijincho. During the car ride there, he tells Kaito what he had learned of Mikiko's past and Sadamoto's involvement in it.

When they reach the hotel where Mikiko is set to appear, Igarashi waits on standby until Kaito engages with Crimson Lotus. He and Senda assist Kaito until they reach the guest elevator, which is where the Bato Agents stay behind to fight off reinforcements. It is assumed that Senda and Igarashi return to Kamurocho after the incident's resolution.

When Igarashi wields a sword, he uses Akira Murase's moveset when he wields a sword during both his boss fights in Judgment. When fighting as an AI ally, he uses Yahata's moveset from Yakuza 5, and by extension, Kyohei Hamura's moveset also from Judgment. 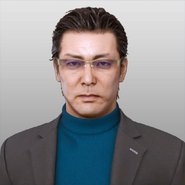