Alan Dale
Masaru Sera (世良 勝, Sera Masaru)[a] is a recurring supporting character in the Yakuza series. He starts off in the series as the Third Chairman of the Tojo Clan.

Yakuza 0 highlights his life before becoming the Third Chairman, as the President of the Tojo Clan's Nikkyo Consortium, a black ops group responsible for handling the clan's dirty work. He acts as an ally to both Kazuma Kiryu and Goro Majima, and by the game's end, rises to his chairman post. He also appears as the protagonist of the Sera and Kazama: Tojo Clan Classified event in Ryu ga Gotoku Online.

Sera has short slicked-back hair and a goatee.

Sera appears as a calm, composed, yet assertive individual, all of which are commonly regarded qualities of a good leader. He also described himself as a cautious person, not entirely trusting on a certain result until he can verify it himself, to a point where in Yakuza 0 he challenges Majima into a fight just to prove how committed Majima is to protect Makoto Makimura.

Like Shintaro Kazama, who mentored him, Sera has a good heart, being willing to protect Makoto himself and believing that innocents should not be involved in Tojo Clan matters. This was initially lost when he decided to work with Kyohei Jingu and complied with his request to kill his wife and daughter; it was not until Kazama himself intercepted his assassin that Sera learned the error of his ways and engineered the 10 billion yen theft after realizing that Jingu was using the money to manipulate the Tojo clan to do his bidding. Even knowing that he would eventually be assassinated himself, Sera stays headstrong and unbending to the pressure.

During the 1970's, Sera was an infamous student activist leader who frequently organized anti-government protests. These protests were presumably against the Citizens' Liberal Party which, if it is like its real-life counterpart, the Japanese Liberal Democratic Party, would've been in power since 1955 almost entirely unopposed and mired in corruption scandals throughout the 1970's. In 1977, he was arrested on charges of inciting a riot, and was subsequently sentenced to an unspecified amount of time in prison. While in prison, Sera met Shintaro Kazama of the Tojo Clan, and the two would form a strong friendship which would eventually lead to Sera joining the yakuza. Throughout the early 1980's, Sera advanced within the ranks of the Tojo and prior to 1988, he was made patriarch of his own organization, the Nikkyo Consortium.

As the conflict over the Empty Lot drags all three families into a state of war, Sera goes to Sotenbori after learning from Tachibana that Makoto Makimura, his sister, is the heir of the land after learning her grandfather entrusted it to one of their grandchildren. When Sagawa learned of Majima's attempt to save Makoto and get her out the city and uses a car bomb to kill Lee and finish off both Makoto and Majima, he denies Sagawa his bounty by shooting him and knock Majima unconscious then takes Makoto to Kamurocho as Tachibana wanted to see his sister again.

After handing Makoto over to Kiryu and Oda as well giving Makoto a cane with a hidden blade, he challenges Majima to a fight in exchange for telling who was keeping Makoto where Majima emerges victorious. He was then shot by Sagawa who wanted the death of a person in exchange for Majima's freedom and allows him to return to Kamurocho to kill Makoto together.

Sera meets Majima again shortly after Makoto was shot, he offers to save her on one condition: as Majima was given the right to hand the land over to anybody he wants, he gives it to Sera to save her. After Kiryu and Majima defeats the last two lieutenants of Dojima, Majima prepares to kill Lao Gui for his attempt on Makoto's life only to be stopped by Sera, who tells him if he kills Lao Gui, he is going to be no better than Dojima or Lao Gui and instead tells him to leave them for the authorities to put them in a cell. With the land secured, he secures the position of Tojo Clan Captain, eventually becoming the third chairman in 1993, bringing the clan to a long and stable reign with strong political alliance with Kyohei Jingu.

Sera helped Jingu launder 10 billion yen that the latter acquired by storing the money in the Tojo Clan's bank. However, after witnessing Jingu attempting to murder his own wife and daughter and using the 10 billion yen to bribe the clan to perpetuate his agenda, Sera repented and removed the money from the bank. He did this with Kazama's and Yumi's help. Before they could expose Jingu's crime, Akira Nishikiyama, who partnered with Jingu so that he could be the new Chairman of the clan, called an emergency meeting and told the captains of the Tojo clan that the 10 billion yen was missing. This prompted a civil war among the Tojo Clan since everyone believed that it was a robbery of hard-earned money. In addition, those who could find the missing money were promised chairmanship. Sera went back to cover up his tracks but was nonetheless assassinated. The Florist of Sai and the surviving Nikkyo Consortium members suspect that Nishikiyama killed him.

Kiryu, upon being released, also learned that Sera allowed Kazama to choose who should be the next Chairman, as he suspected that his death is near.

Yakuza Kiwami: the reason that Sera sent the assassin in prison to kill Kiryu (through his subordinate and new leader of the Nikkyo Consortium, Kunieda) after his arrest for the murder of Sohei Dojima was actually to save him. Sera intended for Kiryu to return to the clan as soon as he was able to, proven by Kiryu's expulsion from the clan, rather than complete banishment. However, because of Kiryu's crime, the other families would likely try to kill him; thus, Sera ordered the hit as a way of sending a message to the rest of the Tojo clan that only he could end Kiryu's life, as well as testing Kiryu to see if he was worth saving. After the failed hit, Kiryu lived a quiet 10 years in prison, free from any other attempts at his life.

Despite his calm manners, Sera is a capable fighter. His moves mostly consist of slow, but otherwise precise combos and perfectly-timed counterattacks. His fighting style also emphasizes balance, with his combos and attacks almost never breaking his upright stance and posture, making him difficult to knock down. He emits a purple aura when in Heat mode. 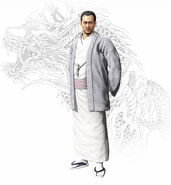 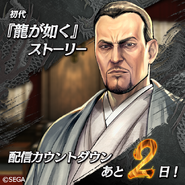 Countdown image for the release of Yakuza's story chapter