"All I care about is the fight! I ain't one of those sad sacks who sits on their ass countin' their cash! I want yakuza to go up against the strongest of the strong!"

Masaru Watase (渡瀬 勝, Watase Masaru) is a supporting character in Yakuza 5 and Yakuza: Like a Dragon. He is the captain of the Omi Alliance as well as the patriarch of the Watase Family.

Watase is a muscular man with a relatively short, stocky build, putting all his weight behind his attacks. He has short dark hair, slicked back with a widow's peak, as well as a goatee.

Watase's tattoo covers his biceps, upper chest, and stretches from his neck to his lower back. It depicts the Asura King on his back, a vajra on his left arm, and a cakraratna wheel on his right arm. This is a portrayal of a battle between Taishakuten and the Asura King, in which Taishakuten uses the vajra and the cakraratna to attack the Asura King.

His attire consists of an offwhite pinstriped double-breasted suit worn over a black dress shirt, checkered tie, and white oxfords. Additionally, he wears a Watase Family crest pin on his lapel and is often seen in sunglasses.

A fierce "man's man" with no interest in money, schemes, or fussing over the finer details, Watase loves fighting more than anything else and is considered the Omi Alliance's most militant. He possesses an overwhelming presence and a great deal of charisma, described as running the Watase Family, the largest organization in the Omi's ranks, on charm alone. Though he often lets his emotions get the better of him, he is capable of being remarkably observant and well-informed, and prefers to remain a spectator until push comes to shove.

Watase aspires to be the strongest in Japan and take control of the whole country in an all-out war against the Tojo Clan as the Omi's eighth chairman, surpassing the might of Ryuji Goda. However, he does not care to do so without going up against the "strongest of the strong," and views Kazuma Kiryu as the only worthy opponent to lead the Tojo Clan during the conflict. His grand visions of war indicate to Kiryu that, in Watase's eyes, "being a yakuza is a way to die."

As an old-school yakuza, Watase only respects power and authority, and appears to have a strong sense of loyalty and an understanding of the responsibilities of his position. He holds a high opinion of Kiryu due to his legendary status, to the point he would begrudgingly accept the long-neutral Yomei Alliance becoming affiliated with the Tojo Clan if Kiryu oversaw the proceedings.

Watase was loyal to Tsubasa Kurosawa long before and after he took the position of seventh chairman, to the point of agreeing to swear an oath of brotherhood with Minoru Aoyama on Kurosawa's orders despite his disgust at Aoyama's low rank in comparison to himself. Due to Kurosawa's worsening condition, he decided he would start doing things his own way.

Confident he was the only viable candidate, he intended to launch a full-scale war against the Tojo Clan when the time came for him to take over as eighth chairman. However, he found himself unimpressed with the Tojo in its current state and considered it too pathetic under Daigo Dojima's leadership to be worth defeating. He began trying to track Kazuma Kiryu's whereabouts down after his sudden disappearance from Okinawa prior to the events of Yakuza 5 in the hopes of convincing him to come back to the Tojo Clan and return it to its former glory.

On a tip from Aoyama, Watase arrives in Nagasugai, Fukuoka, where he first encounters Kiryu at the hostess Club Olivier. Recognizing Kiryu near-immediately due to his notoriety among yakuza, Watase treats Kiryu with respect, addressing him as "Kiryu-han." Kiryu, however, believes that he is the one responsible for Daigo Dojima's disappearance, and reacts with hostility.

Watase reveals that he learned of both Kiryu's whereabouts and Daigo's disappearance from Minoru Aoyama, his sworn brother and assistant to Daigo. He also reveals his true goals; to become the eighth chairman of Omi Alliance and stage a war with Tojo Clan - but only if the Tojo Clan is a strong adversary. As it stands, he refuses to fight them in their weakened state. He asks Kiryu to return to the Tojo Clan, viewing Kiryu as the true opponent he must face as opposed to Daigo.

Watase later appears during the finale atop the Kamurocho Hills rooftop, wherein he stands alongside Kiryu, Taiga Saejima and Naoki Katsuya. Katsuya encourages the four of them to fight among themselves in order to draw out the mastermind. Here, Watase finally battles Kiryu, but ultimately loses. After Saejima defeats Katsuya, and Saejima and Kiryu have a draw, the true mastermind of the plot is revealed - it is Tsubasa Kurosawa, pretending to be a detective to Saejima and Kiryu, who is indeed the Seventh Chairman of the Omi Alliance. Kurosawa attempts to kill Watase, but Katsuya takes a bullet for him, to his gratitude, and the four are able to survive the encounter.

Later, Watase is seen visiting Katsuya in the hospital, wherein he crosses paths with Tatsuo Shinada. In his final appearance in the game, he and his men, alongside the memberships of both the Yamagasa Family and the family ran by Daizo Kitakata, defeats Kurosawa's men. He and his men, along with the members of the other two factions, graciously bow their heads to Shun Akiyama after he defeats Kamon Kanai, out of respect for the work Akiyama and the other protagonists have done in foiling Kurosawa's schemes, describing it as the first time the Omi Alliance has ever bowed its head to anyone.

Watase continues to serve as captain of the Omi Alliance under its eighth chairman. He comes up with a plan alongside Daigo Dojima to dissolve both the Tojo Clan and the Omi Alliance in order to undermine Ryo Aoki's Kamurocho 3K Plan, but is sent to prison in 2017. In his absence, he appoints Masumi Arakawa as acting captain of the Omi Alliance to ensure it splits up between Kamurocho and Sotenbori, halving the potential resistance of this decision going through. He is discharged from prison at the start of 2019, the day after Ichiban Kasuga and his party arrive at Omi Headquarters to discuss this plan. As the Eighth Chairman passed away during his stay in prison, he reassumes command of the Omi Alliance and prepares a speech in front of all Omi Alliance officers in Sotenbori.

Watase announces the disbandment of the Omi Alliance, with Daigo following suit with the Tojo Clan. This starts an all-out brawl between the officers and the group Arakawa has gathered to defend the two men, which includes Kasuga's party, Goro Majima, Taiga Saejima, and Yosuke Tendo. When an opposing officer with a knife is about to break through, he is stopped by Kazuma Kiryu, who was thought to be truly dead by everyone else. Daigo asks how he managed to find Kiryu; Watase simply states he hired a bodyguard and does not even know his name, respecting Kiryu's wishes to remain hidden.

After Ryo Aoki's death, he begins working on establishing a legitimate security company based in Osaka alongside Daigo and other former high ranked Tojo Clan officers. They ask if Kasuga would like to join, but he declines. 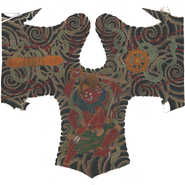