In the yakuza world, the strongest should win. Battles aren't won through things you've born with! So while you and your charismatic buddies ramped around...I kept training in the shadows by myself. Because I believe the strongest always wins.
— Masato Aizawa

Masato Aizawa is a minor character who appears during Kiryu's section, and later one of the primary antagonists and final boss in Yakuza 5. He is Dojima's bodyguard and Aoyama's secretary alongside his partner and sworn brother Morinaga. In reality he is Kurosawa's son and secretly worked behind the scenes with his father to uproot and conquer the Tojo clan.

He has two outfits during his appearance: a standard black suit over white shirt and a silver tie with Tojo Clan insignia and a white pinstriped suit over purple shirt in his later appearance.

His tattoo depicts a carp, which, according to legends, can ascend into a dragon, symbolizing Aizawa's ulterior motive to surpass Kiryu.

Aizawa is mostly quiet and soft-spoken towards the beginning, but as the story progresses we see his true self. One example is when he killed his best friend in order to obtain power not to mention training in the shadows for most of his life. Aizawa values power above all else, but does not resort to trickery like his father given the fact he took Saejima and Kiryu on in a fair fight. Aizawa is one of the few characters throughout the Yakuza series that has some sort of pride given his motives.

Aizawa relies on brute force. He has several strong strikes and grabs to fight against Kiryu. He is shown to be able to lift Kiryu and even run while carrying Kiryu. Aizawa also seems capable of using a katana but this is never shown in combat. 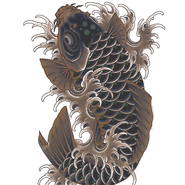 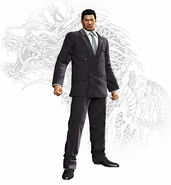 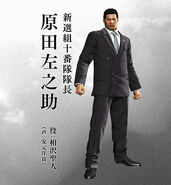 Aizawa before final battle
Add a photo to this gallery
Retrieved from "https://yakuza.fandom.com/wiki/Masato_Aizawa?oldid=77637"
Community content is available under CC-BY-SA unless otherwise noted.