watch 02:45
The Loop (Games)
Do you like this video?
Play Sound
Majima Construction is at work!
This article is a stub and is under construction. You can help Yakuza Wiki by expanding it. Be sure to check out the manual before you get started!

Masumi Arakawa (荒川 真澄, Arakawa Masumi), also known by his stage name Taro Arayoshi (荒良 太郎, Arayoshi Tarō), is a supporting character in Yakuza: Like a Dragon and an antagonist in The Legend of Ichiban Kasuga in Ryu ga Gotoku Online.

His long history as a hitman and his reputation as the militant leader of the Arakawa Family earned him the nickname "Arakawa the Assassin" (殺しの荒川, koroshi no Arakawa).

In his younger days, Masumi wears a leather trench coat over a snakeskin-motif shirt, a matching pair of dress pants, a pair of dark red leather shoes, a pair of leather gloves, and a fedora hat. In 2019, his attire is a bit changed, with the hat now gone, his shoes now brown instead of dark red, and his trench coat now complemented with a suit jacket and a vest. As the years progressed, his hair is also graying.

As a yakuza patriarch, Arakawa appears as a considerate person towards his underlings, especially Ichiban, whom he treats just like an actual son and able to persuade Ichiban to work better with Sawashiro during his tenure.

Masumi was born in 1957 to Yoko Arakawa and Toshio Arakawa. Although he had a loving father, Masumi had a troubled home life as a child, and received the scar on his face at the hands of his mother at a young age. Born and raised in a popular theater troupe called Araboshi-za, Masumi surpassed Toshio as a top-billing actor in the taishū engeki genre by the age of fourteen and was celebrated for his female roles as an onnagata. Due to how often the troupe moved from place to place, Masumi never developed friendships in school.

In 1971, after the troupe's final show of the season in Isezaki Ijincho, Yokohama, Toshio planned to treat Masumi to Peking duck at a Chinese restaurant called Heian Tower. However, that night at the restaurant, Toshio was murdered by a hitman sent by the Seiryu Clan. The incident had a profound effect on Masumi, who spent the next seven years searching for the killer.

With the troupe disbanded after Toshio's death, Masumi drifted to Kamurocho along with some fellow troupe members. He ended up joining the yakuza at the age of seventeen under the Hikawa Family, a Tojo Clan subsidiary. The Hikawa Family regularly killed people without hesitation, which Masumi took advantage of, disposing of the bodies in Ijincho's Homeless Quarter in order to spend as much time in Yokohama as possible and track down the culprit behind his father's murder, with no leads except for the memory of the killer's face. As part of Hikawa Family, Masumi came to be a hardened killer.

The patriarch of Hikawa Family eventually arranged a relationship between his daughter and Masumi. This soon fizzled out due to a mutual lack of interest, and Masumi began seeing a woman named Akane in secret. In 1976, Masumi decided to settle down with Akane after she told him she was pregnant, but could not think of a way to bring up the subject to his patriarch. He only made his relationship and the pregnancy known to his patriarch the day Akane was due; however, having lost face, his patriarch had his men beat him badly and ordered them to kill both Akane and the baby.

Masumi escaped and told Akane to meet him at Cafe Alps after she had given birth. Several hours later, he received a phone call from Akane, who told him that Hikawa Family yakuza were closing in, prompting her to run away with the newborn baby to Shinjuku Station. He told her to hide the baby in a coin locker and to get to a safer location as soon as possible to ensure their safety. However, unbeknownst to him, she hid the baby in locker #100, adjacent to locker #99 where Jo Sawashiro and his girlfriend at the time had abandoned their newborn.

After retrieving the baby from locker #99, he rushed him to the hospital, where the baby was diagnosed with hypothermia-induced multiple organ failure. He later learned that Akane was caught by the yakuza and murdered while he was on his way to the hospital. He left Kamurocho for several days following the incident. Upon his return to Kamurocho, he crushed the Hikawa Family completely as vengeance. Unaware that he was not the baby's biological father, he raised him as his own, giving him the name Masato; 真 (masa), the first kanji in Masumi and 斗 (to), the first kanji in Toshio.

By 1980, he managed to track down his father's killer: Ryuhei Hoshino. He invited Hoshino to Heian Tower where he interrogated him at gunpoint regarding his motives. Hoshino told him everything regarding the counterfeit operation in Yokohama and that Toshio had been smuggling bills on behalf of the organizations involved. However, one hundred million yen in counterfeit bills turned up missing while in Toshio's possession, prompting the Seiryu Clan to eliminate him; in reality, the money had been stolen by Yoko and the man she was having an affair with at the time, Tora. Once he learned the truth, Masumi spared Hoshino's life and left quietly.

He later established the Arakawa Family, a third-tier organization within the Tojo Clan's ranks, meeting and swearing Jo Sawashiro into the family in 1982. The family gained notoriety due to its militant nature and became feared among the residents of Kamurocho, with Masumi himself earning the nickname "Arakawa the Assassin." The family left many bodies in its wake during the Bubble and formed an agreement with the homeless camp in Ijincho to dispose of them there. On request, as an unspoken service, they were also skilled in faking the deaths of their clients, who were dropped off at Ijincho to start their new lives.

In 1984, Hoshino gifted him a defective counterfeit bill with the words "Benevolence and strictness go hand in hand; Don't forget." inscribed on the otherwise blank backside, to commemorate the change in the design of the ten-thousand yen bill that year.

One day, in 1993, he was called to the offices of a rival family to retrieve and take responsibility for Ichiban Kasuga, a sixteen-year-old boy who had hospitalized one of their members and was claiming to be from the Arakawa Family. Although he had never met Kasuga before, in order to maintain his reputation, he agreed to the rival family's demands and readily followed through with performing yubitsume as an apology in exchange for Kasuga's safety. He was followed back to the Arakawa Family office by Kasuga, who waited outside every day for one hundred days straight until Masumi finally relented and accepted him into the Arakawa Family.

In order to complete his secret plan with Daigo Dojima who wanted to dissolve the Omi Alliance and the former Tojo Clan at the same time, he feigned to turn over to the Omi and was appointed the acting captain of the Omi Alliance. This feigning also included the shooting of Ichiban Kasuga who wanted to meet him after being freed from prison.

After providing the information required for the Kamurocho 3K Plan, he continued to cooperate with his son, Masato, who is now known under the name Ryo Aoki.

After the meeting ended, Masumi returned to Yokohama and told Kasuga about what will he do in his post-yakuza life. On the way back home, during his meeting with Yosuke Tendo, he anticipated an attempt on his life by Reiji Ishioda, but was shot dead by Tendo afterwards.

Arakawa's full-body render (c. 2019)
Add a photo to this gallery 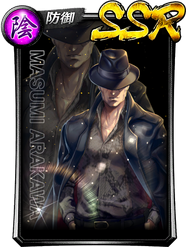 SSR Masumi Arakawa (Black)
Add a photo to this gallery
Retrieved from "https://yakuza.fandom.com/wiki/Masumi_Arakawa?oldid=95522"
Community content is available under CC-BY-SA unless otherwise noted.