We've been together six months, yet you've never made a pass at me... What's wrong with showing a little affection?
— Mayumi to Kiryu, Yakuza 5

Mayumi Madarame (斑目 まゆみ, Madarame Mayumi) is the daughter of Tadashi Madarame and the top hostess at Club Olivier.

Mayumi is sent by her father, Tadashi Madarame, upon Daigo Dojima's request to keep an eye on Kazuma Kiryu. Over the course of his six months in Fukuoka, she grows close to Kiryu, but is frustrated by his lack of interest in a relationship with her. She ultimately feels guilty for her betrayal and promises to do anything she can to make it up to Kiryu. 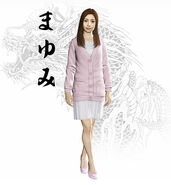 Mayumi with her father, Tadashi Madarame

Add a photo to this gallery
Retrieved from "https://yakuza.fandom.com/wiki/Mayumi_Madarame?oldid=76047"
Community content is available under CC-BY-SA unless otherwise noted.