Kamurocho
Millennium Tower (ミレニアムタワー, Mireniamutawā) is a skyscraper/office tower located in Kamurocho, being its largest building.

In 1988, Millennium Tower had not been built. The land it was to be built on was instead filled with dilapidated shops, the Kamuro Shopping District, and the Empty Lot. The latter, a small patch of contested land, was at the center of Yakuza 0's story, pitching the Tojo Clan's Dojima Family against Kansai's Omi Alliance in a race to acquire the lot and thus its riches. Ultimately, thanks to the efforts Kazuma Kiryu and Goro Majima, the lot's owner Makoto Makimura was able to sell the land to Masaru Sera. As well as creating a seismic shift in the Tojo Clan's power structure away from the cantankerous Sohei Dojima, this outcome also paved the way for Millennium Tower's construction to begin.

In the first game (and also Kiwami), the tower was built during Kiryu's prison term and serves as the place where Mizuki Sawamura (with the help and guidance of Shintaro Kazama) hid the stolen 10 billion yen from Kyohei Jingu. Kazuma Kiryu faces off against Akira Nishikiyama in the tower's penthouse, and after Nishikyama loses, he stabs Jingu and sacrifices himself by destroying the vault containing the 10 billion yen with explosives, causing scattered money to rain down on the streets of Kamurocho.

The incident, recounted through a flashback in Yakuza 4, helped the homeless Shun Akiyama regain his wealth, as he was present during the explosion and collected money as it fell.

The events of Yakuza 2 start with the Millennium Tower's top floor (a gift by Fifth Chairman Yukio Terada to the Kazama Family), now the Kazama Family office, being blown up again. The investigation into this event, as well as Ryuji Goda's involvement, is a central driver of the plot of the game.

Between the events of Yakuza and Yakuza 2, The Florist moved his base from Purgatory to the 50th floor of the tower due to him being subcontracted by the police. His old office in Purgatory is put under Majima's care, which the latter uses as a base of operations for his company. The Kazama family moves its office to the top floor of the tower, under the leadership of its new patriarch Osamu Kashiwagi. The Florist's new headquarters is the location where Jiro Kawara is killed by Wataru Kurahashi. Later, he moves back into Purgatory.

The the Kazama Family still operates at the tower's top floor, until Kashiwagi was violently deposed. Kiryu's first fight with Majima in the game happened at the tower's rooftop.

A number of events in Yakuza 4 happened here, such as Saejima's fight against Daisaku Minami, the exchange between Akiyama and Yasuko, Majima's arrest, and the final fights. An underground passageway is accessible from the back, prominently used by Saejima to avoid the police.

The top floor became the Majima Family's base of operations at this point.

A notable event that happened during the fifth game is when Majima was held as a hostage by the Omi Alliance. Kiryu and Saejima fight Kurosawa's men on the top of the tower.

Takumi Someya is forced to fight against Kiryu in order to save his ex-wife Kiyomi, which Someya loses. Finally he kills himself to save her.

The tower can be seen under construction in December 31, 2000 and the following day.

In 2019, Ichiban Kasuga and his group infiltrated the Millennium Tower and fought the Omi Alliance members. After reaching the Arakawa Family Office, Ichiban and his group fought Yosuke Tendo., and fought Ryo Aoki and his men afterwards.

The tower also appears as an additional dungeon which will be available after completing the main story. After climbing through the tower and reaching the Arakawa Family Office, the player will be fighting Shin Amon, who worked as the manager of the tower. Defeating him will allow the player to unlock an even harder version of the dungeon available from the "Premium Masters Pack" DLC. This harder new dungeon's entrance is on the back entrance of the tower.

It appears in Chapter 38: Undying Souls. The group responsible for the Thanatos attack is the Shadaloo organization led by M.Bison (Street Fighter series). 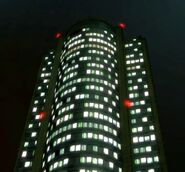 Millennium Tower, with Kamurocho Hills under construction in the background.